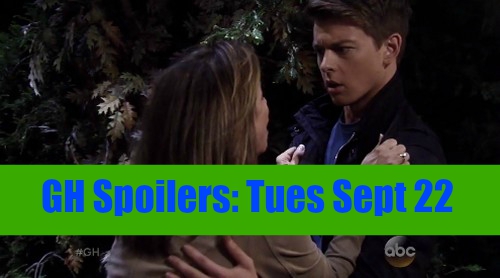 These “General Hospital” spoilers will get you ready for the Tuesday, September 22 episode. Tuesday’s action in Port Charles is all mob-centric. First, Maxie Jones (Kirsten Storms) is surprised to hear about Paul Hornsby’s (Richard Burgi) history with organized crime. And Maxie hasn’t even heard the full extent of what Paul did – such as being forced to marry Tracy Quartermaine (Jane Elliot) so he could use ELQ to launder DVX cartel money through the corporation.

Maxie asks Dillon Quartermaine (Robert Palmer Watkins) if he completely trusts his dad. Dillon wants to trust Paul, but has years of absentee fatherhood vibes to contend with. But this week, Dillon and Paul will have some more bonding time. But for now, Paul is up to no good with Ava Jerome (Maura West). Paul wants Ava to be the face of the Jerome crime family.

Ava doesn’t care much for this, but if it gets her daughter Avery back, she’s willing to give it a try. Ava and Paul also have a serious talk about Julian Jerome (William deVry) and his possible involvement with Paul. Ava won’t like that Paul is using Julian as a scapegoat for his recent mob activities, but Julian had to know about Paul’s actions and was likely a willing accomplice.

TJ Ashford (Tequan Richmond) has a talk with Ric Lansing (Rick Hearst) about all the goings on with the Corinthos family and their mutual worries about Sonny Corinthos (Maurice Benard). Looks like Sonny will get the news soon that he may not walk again and to give it any chance, Sonny will need intensive physical therapy, perhaps on an inpatient basis.

Sonny is certain now that Jason is not dead and is, in fact, Jake Doe (Billy Miller). Sonny is a bit out of it on painkillers and rants to Liz Webber (Rebecca Herbst) and orders her to tell Carly Corinthos (Laura Wright) that Jake is Jason. Liz scrambles to convince everyone that Sonny is dealing with trauma and is hopped up on morphine to keep her lies intact.

Looks like it will be Michael Quartermaine (Chad Duell) and not Jake that saves Morgan Corinthos (Brain Craig) rather than Jake, although Jake may show up later to lend a hand. Michael finds a frantic Alexis Davis (Nancy Lee Grahn) outside the lake house then Mikey rushes in just as there is a gunshot.

Did Morgan get shot? Julian? Looks like Julian may have wrestled Morgan for the gun and it went off. No one will die but it won’t be pretty. Michael will try and talk Morgan down and will take him back to the rest of the family. Morgan will avoid arrest for now for threatening Julian, but may need a psych diagnosis to keep him from pressing charges.

Michael pledges to keep the family safe while Sonny is out of commission and, as CDL exclusively wrote in another recent spoiler, will take over the mob syndicate until Sonny is back on his feet. Michael is no mobster, but he’s a businessman – and the mob is a business. Carly will express concern, as will Jake, but Michael is firm in his decision to step up to protect the family.

Also, Olivia Falconeri (Lisa LoCicero) will make a cryptic call to Tracy to discuss the fate of baby Leo. Olivia wants her son back in Port Charles, but not in a way that will allow Julian to get his hands on the child. Olivia has a plan but needs Tracy’s help to pull it off. Are they going to try and pass the baby off as someone else’s? Hmm… This is one to watch.

Don’t miss a moment of GH then come back to CDL for more “General Hospital” spoilers, gossip and more.