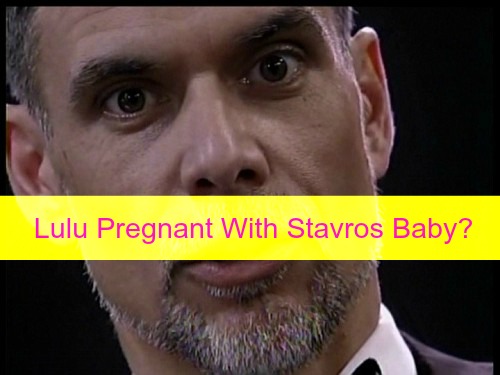 There’s a major baby shakeup coming to Port Charles – this “General Hospital” spoilers looks at Lulu Spencer’s (Emme Rylan) baby plans and how Helena Cassadine (Constance Towers) might throw a monkey wrench into their life. But first, here’s a quick refresher on Lulu’s fertility and infertility for those who are newer to the show.

Lulu had struggled with infertility and so had some embryos created from her eggs and Dante Falconeri’s (Dominic Zamprogna) sperm. One was implanted in Maxie Jones (Kirsten Storms) but she miscarried the baby. Then another was used by Britt Westbourne (Kelly Thiebaud) and one may have been wasted in this process. The bottom line is that Dante and Lulu have one embryo left that’s supposedly in storage.

Dante and Lule have been told they can’t make any more embryos because Lulu’s eggs were irrevocably damaged when she was cryogenically frozen. It was Stavros Cassadine (Robert Kelker-Kelly) that froze her because he was in love with her and wanted to make babies with her. What’s sick is, if you don’t know, Stavros is her brother Nikolas Cassadine’s (Tyler Christopher) father.

Turns out Stavros harvested one of Lulu’s eggs prior to putting her in cold storage and fertilized it with his sperm to make a Stavros-Lulu embryo. However, both Dante and Lulu believe that embryo was destroyed in the fire at the Crichton-Clark clinic but, in fact, Helena rescued the embryo that would be the offspring of her son Stavros and Lulu if it was hatched.

So, here’s the thing. Right now there are two Lulu embryos out there – one with Dante and one with Stavros. Anna Devane (Finola Hughes) told them their embryo is in secure storage. But we know nothing is secure when it comes to the reach of Helena Cassadine (Constance Towers). There are a few ways this could play out…
• The Dante-Lulu embryo could be missing when they go to get it.
• Alternately, the Dante-Lulu embryo could have been swapped out for the Stavros-Lulu embryo.
• Or, of greater interest, maybe the two embryos could have been stuck in one vial and Lulu could be implanted with both.

What’s really disturbing about the notion of a Stavros-Lulu baby is that Lulu would give birth to the brother of her brother – and would share a baby daddy with her mom Laura Spencer (Genie Francis). And what if Lulu ended up implanted with both embryos? She could have a normal Falconeri kid and then an evil Cassadine twin gestating together. That would be a fun plotline for years to come.

If Lulu ends up with the Stavros embryo in her belly, it will add to the Cassadine family tree that is resoundingly Greek in its tragic branches (although they are technically Russian by heritage). One thing we know about Lulu is that nothing related to her reproductive storyline is ever simple, so don’t expect her to get a Dante-Lulu, no drama, embryo implantation.

There’s also another monkey wrench in the works for Lulu – this one related to Dante. Nathan West (Ryan Paevey) will tell Dante this week that he should come clean to Lulu about sleeping with Valerie Spencer (Brytni Sarpi). What happens if Dante waits too long and doesn’t spill the beans to his wife until after she has the embryo implanted? Would Lulu take Rocco and her pregnant belly and waddle out?

And would this mean Dillon Quartermaine (Robert Palmer Watkins) has a shot at playing daddy to Lulu’s new baby and little Rocco since Dante would be on the outs? Dillon has made it clear he’s waiting in the wings for Dante to screw up and Dillon saw them talking about baby stuff. And here’s one more thing to consider – suppose Dante finally tells Lulu the truth while she’s preparing to implant the embryo.

Lulu will be doing hormone shots and other fertility measures prior to implantation – so what if the hormone shots stimulate her to ovulate and somehow one of her eggs is viable? Then, when Lulu finds out about Dante cheating with Valerie, she might sleep with Dillon and get pregnant with his child naturally. This would throw a huge twist into the Falconeri baby plans and the fate of their marriage.

This storyline will be fraught with drama and twists – plus a baby or babies of unexpected paternity. Don’t miss a moment of GH action to stay up to date on all the Lulu baby news. And check back with CDL often for more “General Hospital” spoilers, gossip and more.