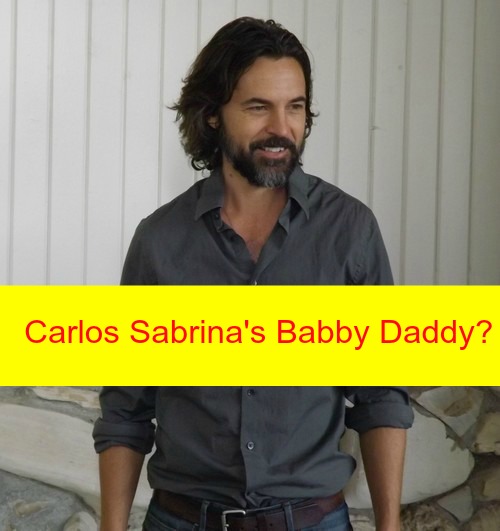 Sabrina Santiago (Teresa Castillo) is pregnant – but this “General Hospital” spoilers explains why there may be some controversy around her great expectation. The thing about this new baby is that it may not be a bouncing baby Quartermaine – it may be a cute little mini-Carlos instead. Here’s why we suspect that Sabrina is pregnant by Carlos Rivera (Jeffrey Vincent Parise) rather than Michael Quartermaine (Chad Duell).

Let’s first consider the dialog that took place today between Sabrina and her BFF Felix DuBois (Marc Samuel):
#1 Sabrina said about telling Michael about the baby “I don’t know if I can.” That’s because if Sabrina was pregnant from a sexual encounter with Carlos, it would have occurred just as Michael and Sabrina were starting their romance which would be an uncomfortable conversation, at best.

#2 Sabrina then said, “I’m not ready” and that she was “Hiding it from myself.” Why would she be hiding from herself the truth of a pregnancy with the man she’s growing to love? It would make sense that she might want to delay telling Michael for a time because of the mob stuff, but why from herself?

#3 She added, “I kept taking pregnancy tests praying for a negative result.” Why would Sabrina pray NOT to be pregnant by Michael? Obviously the timing wouldn’t be great since their relationship is relatively new, but otherwise that’s insane. But praying that it’s NOT the child of a missing mobster makes sense.

#4 She also said, “I was just in denial” which could mean she would not want to acknowledge that a farewell sexual encounter with Carlos could have resulted in a baby. She may have even been using birth control with Michael but skipped it the one last time with Carlos – and she is in denial because of that.

But most telling of all was when Felix asked, “Is Michael not the father?” Sabrina did not say “Of course he’s the father.” Instead, Sabrina gave the non-answer of, “Don’t be ridiculous. You know me, how could you even ask that?” That’s a typical avoidance mechanism. She did not answer the question at all – she sidestepped and threw it back on Felix implying that he was offending her by even asking.

This whole situation is suspect. Perhaps at this stage, Sabrina doesn’t know for certain whether it’s Carlos or Michael’s baby. Or once she found out she was pregnant, she went back and did a little counting on her calendar and figured out quickly that it has to be Carlos’s baby. Think about it – Carlos was leaving Port Charles for good and they did really love each other, at least for a time.

They weren’t together because Sabrina couldn’t live with Carlos being a mobster and she wanted to focus on her career while he wanted a more traditional arrangement of her being the mother to his children while he provided for them. That’s part of why she fled Puerto Rico in favor of Port Charles – to finish her nursing degree and get away from what Carlos wanted for her. But she did love him.

And at the point that Carlos was leaving town, Sabrina and Michael were planning their first date, but were NOT involved yet and had NOT even committed to a romance. Carlos told her he had to go away forever so it’s conceivable that Sabrina decided to spend one last night with Carlos as a farewell to him and their love. Carlos was her first love and the man she gave her virginity to so it makes sense.

If Sabrina’s sole concern was that Michael is heading up the Corinthos syndicate while Sonny Corinthos (Maurice Benard) is out of commission, it seems like Sabrina would have said that to Felix as her concern. Instead, she rattle off a bunch of things that didn’t align to the reaction of a woman with an unexpected pregnancy with a man she loves. It seems far more complex than a Sabrina/Michael baby.

The big question is whether Sabrina knows that it’s definitely Carlos’s baby or if it’s just that she knows that it’s a possibility that the baby is Carlos’s rather than Michael’s. What we do know is that Tracy Quartermaine (Jane Elliot) will ferret the baby secret out of Sabrina very soon, but will Tracy also discover that there’s a chance the baby isn’t Michael’s?

And this begs another few questions. Will Sabrina try to pass the baby off as Michael’s? Or will she fess up that it could be Rivera’s child and, if so, would Michael agree to raise the child as his or would he be too caught up in feeling betrayed that she slept with Carlos right as they started dating and just dump her? Could Sabrina end up a single mom with a dead baby daddy?

And how will Anna Devane (Finola Hughes) feel knowing she killed Sabrina’s baby daddy in cold blood after Sabrina helped her track Carlos down based on the assumption that Anna was going to arrest Carlos – not murder him? Anna is already tormenting herself and knowing Carlos has a baby he’ll never see and a child that will never have a father will make things even worse on her.

More on this Sabrina baby debacle as things develop! Stay tuned to CDL for more “General Hospital” spoilers on all things GH including gossip, casting news and more.