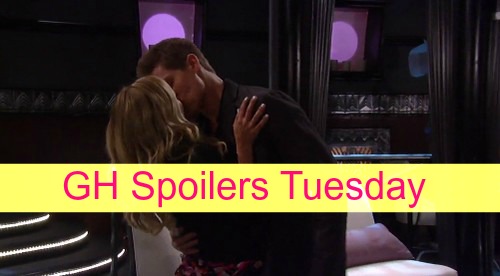 These “General Hospital” spoilers will get you ready for the Tuesday, October 13 episode of your favorite soap. Lots of new storylines ramping up in Port Charles. First, can we just say? “Poor Nina…” That girl cannot get lucky. She was finally about to shag Franco (Roger Howarth) when they got the call that their new foster child Kiki Jerome (Hayley Erin) has been arrested.

Franco has to rush down to the PCPD where Nina’s little brother Nathan West (Ryan Paevey) breaks the news that Kiki will be prosecuted for assault. Will Franco and Nina post bail? Will Kiki be put on house arrest and under the responsibility of pseudo-parents Franco and Nina?

When Ava Jerome (Maura West) hears about Kiki’s arrest, no doubt she’ll lean on DA Paul Hornsby (Richard Burgi) to drop the charges. If Paul does this, though, Ava will be even more indebted to him. Will Alexis Davis (Nancy Lee Grahn) step up to defend her at Julian Jerome’s (William deVry) request or will Franco call in his favorite Port Charles lawyer Diane Miller (Carolyn Hennesy)? We know Diane is due back on GH soon, so maybe she’ll represent Kiki.

Other Jerome family drama centers on Julian who is out for a nice evening with Alexis who wants to have a serious talk about children. They’ve just committed to move in together, so is a baby next? Does Alexis want to have a second child with Julian before it’s too late? It’s been a few years since Alexis got pregnant, but still, modern medicine and all… Julian will tell Alexis that he ran into Olivia Falconeri (Lisa LoCicero) at the MetroCourt and that she’s adopted a baby boy.

Poor Julian – so pretty and so dumb. Let’s see – your baby mama that told you that your baby died is now running around Port Charles with a baby the same age… Can you not do the math on that? Oh yeah, and you never actually saw your dead son, soo…. Hmm… Good thing he’s got Alexis to figure out the hard problems in life for him while he works out and just looks good. Alexis will doubt Olivia’s story even though Julian is naïve enough to buy it.

The next question is, what do they do about it? Obviously Olivia is lying. Will Alexis get Sam Morgan (Kelly Monaco) to investigate the purported adoption? Will they try and sneak a DNA sample from the kid to test it against Julian? Or will Alexis go full steam and just go for a court order to get a warrant to test the kid’s DNA? Olivia doesn’t stand a chance against Alexis. Look for Alexis to take action soon even though she’ll first have to convince Julian to get a clue.

Also shocked by Olivia’s adoption tale is her son Dante Falconeri (Dominic Zamprogna). Olivia shows up at his door with baby Leo and tells him about her brilliant adoption fabrication and that everything is cool now. Not that Dante is a rocket scientist either (that family is more on good looks than brains) – but even Dante can see that her story will not hold water. They’ll discuss how to protect Leo from Julian. Dante is not happy with how his mother is handling this.

More family drama plays out with Carly Corinthos (Laura Wright) and Lucas Jones (Ryan Carnes). Lucas doesn’t think it’s a good idea for Carly and Sonny to get hitched right now with Sonny’s paralysis and medical issues but Carly is desperate to get baby Avery back. Will Lucas need to remind her that Ava is Avery’s mother and should be able to see her kid? Carly won’t like what Lucas has to say and doesn’t think he’s being loyal to her.

Father and son drama is going down at General Hospital today when Sonny Corinthos (Maurice Benard) accuses Morgan Corinthos (Bryan Craig) and Michael Quartermaine (Chad Duell) of betraying him when they started jumping into the syndicate business. Michael will not be the pushover that Sonny is expecting and will stand up to him. Michael is on the offensive and Morgan will stand with his brother and Sonny will just have to deal since there’s nothing he can do from his bed. He can’t even walk…

Michael has more to deal with than just Sonny, he just doesn’t know it yet. Felix DuBois (Marc Samuel) hears from Sabrina Santiago (Teresa Castillo) that she’s definitely pregnant, but she’s also not happy that Michael is in the mob business like Carlos was and she’s not ready to tell him about the baby. However, Tracy Quartermaine (Jane Elliot) finds out and may force Sabrina’s hand. Tracy may think Michael knowing will get him to back out of the mob.

However, if that’s what Tracy and Sabrina think, they are far off the mark. Michael wants to do what Michael wants to do and will run over anyone who gets in his way. And no way will he take an ultimatum from Sabrina or Tracy lying down. Expect Michael to get scarier and more determined in coming weeks. He will not let Sabrina deny him his child, he won’t be told what to do and he will not walk away from Sonny and the syndicate. Trouble is brewing…

All this and more on Tuesday’s episode of GH – be sure to check back with CDL for detailed daily “General Hospital” spoilers plus daily updates on plots, casting and advanced spoilers for weeks to come.