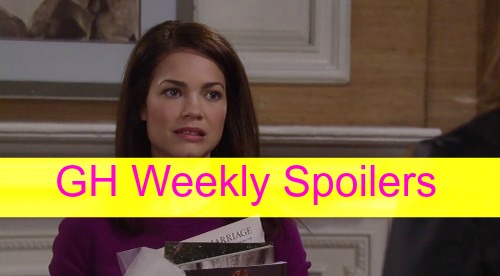 Here’s a look at what to expect with these “General Hospital” spoilers for the week of October 12 through October 16 of the hit ABC soap. This week GH focuses on the Falconeris, Jeromes, Jake’s identity and baby drama.

First, there’s the Falconeri faux pas. Dillon Quartermaine (Robert Palmer Watkins) is so sure that he’s the better man for Lulu Spencer (Emme Rylan) than is Dante Falconeri (Dominic Zamprogna). Dillon knew about Valerie Spencer (Brytni Sarpi) cheating with Dante, but the pregnancy test misunderstanding now has him convinced that Dante may have knocked up Val.

Dillon presses his suit, owns up to his feelings for Lulu and then gives her a big passionate kiss. Lulu does not like what’s going down and Dillon thinks if he tells her about the cheating, he stands a chance. Problem is, Dillon won’t get a chance because Lulu storms off mad that he tried to get her to cheat on Dante. Lulu is furious and Dillon will be despondent.

Enter Valerie. She’s also despondent after her showdown at the PCPD where Dante disrespected her once again and treated her like a scheming skank. Val and Dillon will vent about the Falconeris and do some bonding, but will it turn romantic because they’re both frustrated? So far, there seems to be zero sexual chemistry between these two. Will Val tells him she’s not preggers?

Maxie Jones (Kirsten Storms) and Dillon will find out something surprising while on set. Will they see the footage of Val with Dillon admitting to cheating? Maxie already has her eye on Valerie – once again – after spotting Valerie near the EPT test that was tossed in the trash. Nathan West (Ryan Paevey), however, realizes he screwed up over the test and says sorry to Valerie.

Maxie and Nathan will have to decide whether they’re going to come clean about all the Falconeri secrets. But for now, they are at cross-purposes on what to do about the fate of their BFFs’ marriage. Despite her drama with Dillon, Lulu goes to her OB/GYN appointment and comes back with great news she shares with Dante. Is her uterus ready for a baby?

Dillon will tell Dante he knows he slept with Valerie just as Dante tells Dillon to steer clear of his wife. Did Lulu tell Dante about the kiss to prevent any confusion or will she hang onto it like a shameful secret? Dillon now is holding the info about the affair over Dante’s head which gives him leverage, but what Dillon really wants is Lulu. Does Val feel like second fiddle in all this?

Ava Jerome (Maura West) makes an overture to Kiki Jerome (Hayley Erin) to reconcile and restore their mother-daughter bond but Kiki is not having it. Kiki would reject her under the best of circumstances, but Ava finds her daughter in a less than ideal situation with Kiki was boozing at The Floating Rib. Kiki goes off on her mom and wastes good vodka tossing it in Ava’s face.

Interestingly, Morgan Corinthos (Bryan Craig) will also be there, perhaps making his own mea culpa to Kiki which will also fall on deaf ears. Morgan was just begging Ava to take him back and now it looks like he could go back and try again with Kiki. That boy needs a strong prescription of some behavior management meds and a clue. What an idiot (but a sexy one)…

After the scene with her mom, Kiki turns to her new foster family Nina Clay (Michelle Stafford) and Franco (Roger Howarth) for comfort. Franco takes kind care of her but Nina is worried that their new relationship can’t take the strain of dealing with the deeply troubled Kiki. Nina wants all of Franco’s love and to not be his second priority. He reassures her and their bond deepens.

Ava’s week is not going to be a pleasant one, and won’t get better after the showdown with Kiki. Paul Hornsby (Richard Burgi) has new marching orders for Ava concerning the Jerome syndicate and puts pressure on Ava to make her comply. Anna Devane (Finola Hughes) stops by to also pressure Ava – this is about her tale that Carlos shot Sonny Corinthos (Maurice Benard).

Anna knows it can’t be true, but she can’t say how she knows for sure without implicating herself. Will clever Ava figure out that Anna is hiding something about Ava’s assassin Carlos? Anna will also have a rough week. Jordan Ashford (Vinessa Antoine) has questions for Anna about Carlos that Anna can’t answer and that stresses her out.

Then Paul puts the screws to Anna about the mob violence in Port Charles and Carlos. Is Paul laying groundwork to set Anna up for Kyle Sloane’s (Robb Derringer) murder? Anna may lay a trap for herself with her lies about Carlos and will not see what Paul is trying to do to her because she’s too focused on not being arrested for killing Carlos. Clever Paul, naïve Anna…

There’s also some Corinthos action this week. Sonny will go off on sons Michael Quartermaine (Chad Duell) and Morgan about Michael going to the five families meeting without his permission and their entanglement with his cartel. Problem is, Sonny is weak and Michael is running things so Sonny won’t be able to boot Michael out of the biz. This could get ugly.

And Michael doesn’t know it, but he’s going to be a daddy. Sabrina Santiago (Teresa Castillo) tells Felix DuBois (Marc Samuel) that she is indeed pregnant. Someone else will overhear this as well. Who could it be? If it’s Tracy Quartermaine (Jane Elliot), she may leverage it to try and get Michael out of the mob. If it’s Carly Corinthos (Laura Wright), no telling what she’ll do…

Julian Jerome (William deVry) will tell Alexis Davis (Nancy Lee Grahn) about his run in with Olivia Falconeri (Lisa LoCicero) and her “adopted” baby. Olivia is the least clever woman in Port Charles. She went with the dumbest and most obvious lie – we had much better cover stories we had theorized here at CDL. Is the point of this plot to show that Olivia is a moron?

More shocking, though, than Olivia’s dumb and obvious lie is Julian’s dumb acceptance of the obvious lie. Alexis, however, is far cleverer than that hunk of beefcake she’s shagging and tells Julian clearly that the baby must be Leo and Olivia is lying and they need to get a DNA sample to find out – will they do it on the sly or via a court order? Dante is stunned at his mom’s actions.

After Sam Morgan (Kelly Monaco) almost dies escaping Wyndemere with some data pilfered from Nikolas Cassadine’s (Tyler Christopher) computer, she enlists the recently returned Damien Spinelli (Bradford Anderson) to work some Jackal magic and help them figure out Jake Doe’s (Billy Miller) real identity. It looks like they may have found out a ton of other dirt about Nik.

Will all this be moot if Hayden Barnes (Rebecca Budig) blurts the truth to Jake? Liz Webber (Rebecca Herbst) will grill Hayden and demand she tell her what she knows about Jake. Will Hayden offer to keep quiet for a price? Or will she throw it back in Liz’s face since she knows Liz was complicit in Nikolas

Nikolas, meanwhile, tries to keep the peace – and keep his eye on Hayden – and he offers Hayden a job. Is it at ELQ? Does he ask her to be Spencer Cassadine’s (Nicolas Bechtel) nanny? How can Nikolas best utilize Hayden and keep her out of the loop on his shadier doings but still keep her close enough to enjoy their new relationship? He’d better watch his back with Hayden.

Hayden will go see Patrick Drake (Jason Thompson) for a check-up. She’s concerned because her memories are not returning – just glimpses here and there. Patrick checks her out but has no idea why her brain isn’t cooperating. Liz is antsy about her approaching wedding and what Laura Spencer (Genie Francis) and Hayden know – she’ll lean on BFF Patrick to get her through.

Also, what’s up with Little Jake Spencer (James Nigbor) and that Demon Seed glare of his? If you haven’t seen the classic black and white movie about the murderous adorable girl, Jake totally looks like he’s channeling that vibe. It may be little Jake that blows up Liz’s life. Does little Jake know who big Jake is thanks to Helena Cassadine (Constance Towers)?

So much happening this week in Port Charles and the storylines are beginning to intertwine nicely. Don’t miss a moment and come back to CDL for detailed daily “General Hospital” spoilers, gossip, casting news and more!