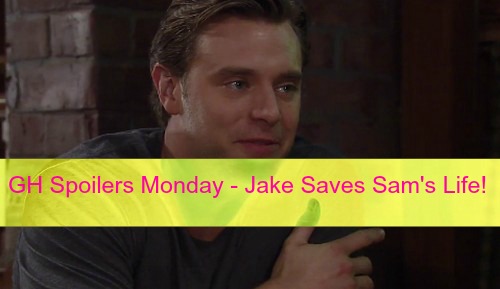 Check out these “General Hospital” spoilers for some insight into the October 12 episode of the hit ABC soap. Rejection, danger and remembrances are the order of the day on Monday’s GH.

The rejection starts with Ava Jerome (Maura West) who makes overtures to daughter Kiki Jerome (Hayley Erin) to try and reconcile. Morgan Corinthos (Bryan Craig) is also on hand and is spurned too. Day-drinking Kiki is livid that Ava has the gall to approach her and tells her to shove off then throws a drink in her mother’s face in case the “go away” message was too subtle. Ava leaves humiliated.

Kiki is saddened by this encounter and feels very alone. The good news is, she’s got some pseudo-parents waiting on her at home. Franco (Roger Howarth) and Nina Clay (Michelle Stafford) are ready to comfort her, but Nina is concerned that Franco has more affection for Kiki and will prioritize their new faux-daughter over her. Franco reassures Nina that he has enough love to go around.

Also getting a heaping helping of rejection is Dillon Quartermaine (Robert Palmer Watkins). He tries to get Lulu Spencer (Emme Rylan) to shut up and listen so he can tell her about her cheating husband but she won’t, so Dillon decides to shut her up with a kiss. But instead of getting the passionate response he hoped for, Lulu gets mad at Dillon. Lulu thinks he’s crapping on her marriage and will huff out.

This means Dillon unwittingly kept Valerie Spencer’s (Brytni Sarpi) cheating secret but for how long? Will Dillon give up and let Lulu find out about Dante Falconeri’s (Dominic Zamprogna) faithlessness some other way? Dillon and Valerie will talk about their feelings. She tells him she’s 100% done with Dante after the pregnancy test debacle. Is Dillon ready to back off of Lulu too? Val and Dillon commiserate.

Also, CDL called it that the new co-head writers have seemingly scrapped the Valerie pregnancy storyline. It was going there since she had morning sickness and other symptoms, but it seems like they’re shelving this plot line which is great. It’s enough that Valerie and Dante shagged and Dillon’s intern filmed a confession that will come into play later.

Also, it looks like Valerie is ready to reject her own feelings for Dante. Her anger over the EPT comedy of errors may have quelled Val’s affection for Dante. Valerie tells Jordan Ashford (Vinessa Antoine), with Dante there as witness, that there is nothing between them at all. Will Dante be relieved or does he have any regret that he’s no longer the apple of Valerie’s adoring eye?

It’s important to note that the pregnancy test misunderstanding is not bygone. Maxie Jones (Kirsten Storms) saw it in the trash and makes some assumptions of her own. Maxie knows that Valerie and Dillon aren’t shagging and already thought Val had a thing for Dante. Can Maxie do the math on this? And will Nathan West (Ryan Paevey) clue her in that Dante and Valerie hooked up?

Now on to the danger… Sam Morgan (Kelly Monaco) nearly falls from one of the parapets at Wyndemere as she and Jake Doe (Billy Miller) make a daring escape to avoid detection by Nikolas Cassadine (Tyler Christopher) after they stole info from Nik’s laptop. On a side note, how many people have died – or nearly died – in a fall from the lofty heights of the Cassadine Casa?

Will pulling Sam back from the brink of death jog Jake’s amnesiac brain? No matter, he’ll know who he is soon enough. What’s good is Sam and Jake scored some meaningful data from Nik’s PC that will help sort things out. But will this info also help them restore ELQ to Michael Quartermaine (Chad Duell)? Or expose Nikolas’ shady election dealings? Or his ties with Paul Hornsby (Richard Burgi)? Or all of this?

And now to the remembrances… Jake may have a flashback when he saves Sam’s life but it looks like Hayden Barnes (Rebecca Budig) isn’t getting her memories back. However, Hayden lies to Nikolas and tells him she’s got a memory. What Hayden is really doing is testing Nikolas by sharing some of what she overheard when he was talking to Laura Spencer (Genie Francis) to see if he’ll come clean to her.

All this and so much more on Monday’s GH – watch then come back to CDL for more “General Hospital” spoilers, gossip and more.