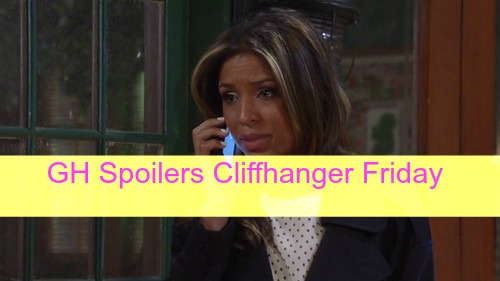 Here’s the “General Hospital” spoilers you need to get excited for the October 9 episode of the hit ABC soap. It’s cliffhanger Friday on GH. First off, what’s up with the movie intern’s backstage footage? Who will see it and how soon? Wouldn’t it be great if it was in front of a crowd?

This little film is the smoking gun in the Dante Falconeri (Dominic Zamprogna) and Valerie Spencer (Brytni Sarpi) cheating scandal. Dillon Quartermaine (Robert Palmer Watkins) told the intern kid that he could use any footage he shot and didn’t listen when the kid tried to tell him he had Dillon and Val on film. So who will see this? Somebody get me some popcorn!

Will Lulu Spencer (Emme Rylan) see it on a visit to the set? Or maybe Maxie Jones (Kirsten Storms) will catch a glimpse. This secret is set to explode in a week or two. Also, what are the odds that two women in Port Charles, both rumored to be dealing with a surprise pregnancy would swap their little drugstore bags? Sabrina Santiago (Teresa Castillo) ended up with Valerie’s Red Vines and Valerie got the pregnancy test – except Nathan West (Ryan Paevey) got hold of the bag.

Nathan assumed the test means Val is pregnant – except a pregnancy test means you suspect you’re pregnant, not that you are. But hey, Nathan is prettier than he is smart, so… Nathan handed the test to Dante who thought it was a great idea to waggle it all around the PCPD conveniently when Dillon was leaving. Dillon, of course, takes this to mean that Valerie is pregnant even though a pregnancy test box is no indictment in and of itself.

But the glimpse of Nathan, Val and the EPT is all the evidence Dillon needs to rationalize telling Lulu he loves her – especially since he was looking for an excuse to do so anyway. Also interesting is Dante’s response. He rants at Valerie, who may or may not be pregnant. That’s the big question. All signs pointed to Valerie being preggers. Remember, she was nauseous at the canceled wedding of Sonny Corinthos (Maurice Benard) and Carly Corinthos (Laura Wright).

Plus Val has been rubbing her tummy and staring at Dante with longing. However – and here’s a big, big, BUT – the plot may have changed. Valerie’s shag fest with Dante was a Ron Carlivati storyline as was the pregnancy.

But have Jean Passanante and Shelly Altman changed this up now and decided NOT to go with a pregnancy? Hopefully we’ll know soon. Signs still point to a Val-Dante baby since Dante and Lulu were just talking about popping their last embryo into Lulu’s hopefully-receptive uterus.

When/if Lulu makes it to the doctor, no doubt there will be news of something dramatic such as a hostile uterus, missing embryo, or other bad fertility news. If Dante gets another baby, looks like it will be from cousin Valerie. Oy!

In the meantime, Valerie will get royally pissed off about Dante waggling a pregnancy test in her face since she didn’t buy it or leave it lying around. Val has had it with Dante. He made it clear that he has zero interest in her and considers their one night stand a horrible mistake.

Valerie certainly doesn’t want to be further humiliated by him, particularly not at work. Dante is playing with fire here. Valerie could snap and tell Lulu the truth just to shut him up and keep Dillon from tattling (which she knows is a risk).

Dillon will tell Lulu that he’s the man for her and Dante is a cheater – but this may come out in increments rather than all at once – and Lulu will be resistant to the truth. However, one look at the backstage footage and it’s not a rumor anymore!

And speaking of Falconeris and truth – how dumb is Olivia Falconeri (Lisa LoCicero) for taking baby Leo out for a jaunt right outside the hotel room where Alexis Davis (Nancy Lee Grahn) and Julian Jerome (William deVry) were staying?

Is that what that clever minx thinks is keeping things on the down low? What an idiot. Now Olivia has to scramble to make up a plausible story to tell Julian – and Julian is a moron if he believes her. Olivia needs to pull more people into this plot to carry it out.

Rumor has it that Tracy Quartermaine (Jane Elliot) will help pull it off and more outlandish speculation indicates that Franco (Roger Howarth) and Nina Clay (Michelle Stafford) may also be in the mix. They seem like a long shot, though, since they’ll be nesting with Kiki Jerome (Hayley Erin) who would blab to her Uncle Julian. Looks like the Qs have other secret baby news too. Sabrina is preggers (we’re assuming it’s Michael Quartermaine’s (Chad Duell) baby and not the offspring of Carlos) but not talking for now.

Also dealing with secrets are Jake Doe (Billy Miller) and Hayden Barnes (Rebecca Budig). Jake agrees with Laura Spencer (Genie Francis) that he should know who he is before he weds Liz Webber (Rebecca Herbst) so he’s enlisted Sam Morgan (Kelly Monaco) to help him figure things out. They’ll start their investigation which will put them both in danger and will amp up the intimacy between them and could trigger even more memories for Jake.

On the flip side, there’s Hayden who has information but no memories whatsoever. Hayden now knows that Nikolas Cassadine (Tyler Christopher) knows that Jake is Jason, that Nik feelings for her, and Nik likely tried to have her whacked.

Even without her memories, Hayden will hatch a plan to exact revenge on Nikolas and Liz for toying with her and Jake – and for trying to kill her. Look for Hayden to keep playing seductive games with the Cassadine prince while she plots to betray him – deservedly so.

Liz, meanwhile, is deep in denial (it’s not just a river in Egypt). She tries on her veil in advance of her bigamist wedding. Laura shows up to rant at Liz about the dirty deed that Liz is plotting. Laura wants to know how Liz thinks it’s okay to marry Jason and let Sam marry Patrick Drake (Jason Thompson) when Jason and Sam are already married to each other. Liz will try to sway Laura but Laura tells Liz to come clean or she’ll come clean for her. Liz will run to Nikolas soon to talk about this.

Also, Maxie comes to see Nathan at work – are the two ready to fill each other in on the Dante/Lulu/Dillon/Valerie secrets they know? Imagine how much info these two would have if they shared their knowledge… Maxie also wants to make sure that Nathan calms down about the movie shoot. Sonny will lay down the law with Michael and Morgan Corinthos (Bryan Craig) on staying out of the mob business, but they won’t back down. Michael is turning into a real Corinthos once again.

All this and so much more on cliffhanger Friday! Watch then come back to CDL for tons more “General Hospital” spoilers, gossip, and more.