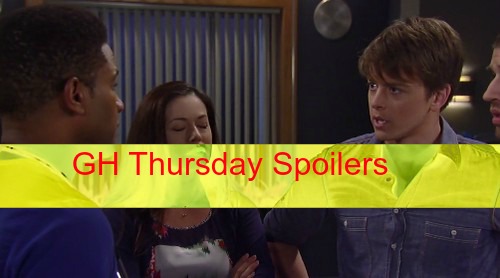 Check out these “General Hospital” spoilers for the October 8 episode of the hit ABC soap. Secrets and baby news are the order of the day on Thursday’s GH. Let’s talk babies first. Sabrina Santiago (Teresa Castillo) makes a call to set up a pregnancy test and Michael Quartermaine (Chad Duell) shows up at The Floating Rib just in time to hear the word “baby.”

Michael will be surprised to hear there’s a chance he could be a father. The problem is, Sabrina does not want to have a baby with a mobster. If that’s what she wanted, Sabrina would still be with Carlos Rivera (Jeffrey Vincent Parise). Once Sabrina confirms her pregnancy, she and Michael will argue over the mob.

Dante Falconeri (Dominic Zamprogna) and Lulu Spencer (Emme Rylan) are also talking babies. Dante suggests they crack their last egg and have a baby. Problem is, Dante doesn’t want this for the right reasons. He’s worried about their marriage and feeling guilty about sleeping with Valerie Spencer (Brytni Sarpi) and is looking for a distraction and Band-Aid for the marriage. Lulu will set up a doctor’s appointment to talk about it and they’ll get some bad news. Is their last embryo missing?

More baby drama is coming to the Jerome family – and this time it’s not Ava Jerome (Maura West) that’s the focus of it – it’s Julian Jerome (William deVry). Julian has just adjusted to the idea of his son Leo being dead but Olivia Falconeri (Lisa LoCicero) will launch a plan to sneak their son back into town. Looks like Oliva will embroil Tracy Quartermaine (Jane Elliot) in her scheme. Paul Hornsby (Richard Burgi) catches Tracy plotting – is the baby plan all she’s up to? Or is Tracy digging into something else?

Now to the secrets. Dillon Quartermaine (Robert Palmer Watkins) is harboring a secret crush on Lulu and also keeping the secret of Valerie and Dante’s one night stand. Looks like he might not keep either of these as quiet as he should. Dillon goes to see his dad Paul for some advice. Will Paul offer the best advice for Dillon’s circumstances? Or will Paul prioritize his own shady interests and send Dillon down a destructive path that will benefit Paul’s mob and City Hall plotting? Surely the latter…

Sonny Corinthos (Maurice Benard) found out the secret that his family was keeping about his baby daughter when he ran into Ava at GH with Avery. Looks like Avery’s medical crisis isn’t upon us yet, but just give it time. Now Sonny has to learn the other stressful secret – that Michael attended the meeting of the five families in his stead. This will lead to a major blow-up between Sonny and his sons and will likely see Morgan Corinthos (Bryan Craig) uniting with Michael to stand against their dad.

What is no secret in Port Charles is how Alexis Davis (Nancy Lee Grahn) feels about baby daddy Julian so she invites him to move in with her at her place. Julian is totally down with that and things seem good since he’s out of the mob and Carlos is now blamed for Sonny’s shooting. But Julian will have a run in with someone that shakes him up. Is it Paul? Olivia? Perhaps someone that convinces him that Carlos couldn’t be the trigger man?

Other secrets involve Dillon and Valerie and how they feel about the Falconeris. Dillon will act on advice from his dad and talk to Lulu soon. Nathan West (Ryan Paevey) has concerns about Dillon and is ready to rough up the movie maker, but is this about Dante? Lulu? Or does it have something to do with his leading lady Maxie Jones (Kirsten Storms)? This whole Nathan-Maxie-Lulu-Dante-Valerie-Dillon thing is getting more entangled by the moment.

All this and so much more on Thursday’s episode – watch then head back to CDL for more “General Hospital” spoilers, gossip and more!