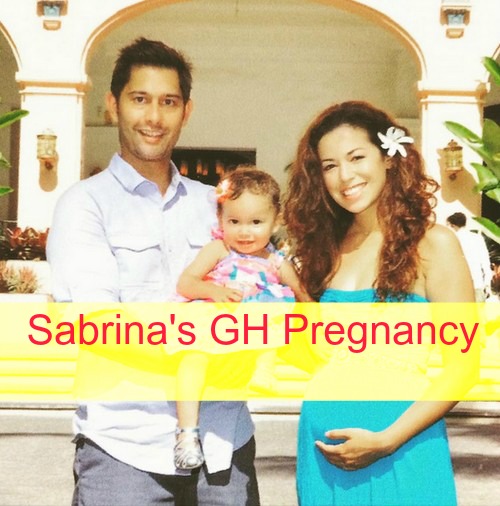 Today’s “General Hospital” spoiler will examine the impact of Sabrina Santiago’s (Teresa Castillo) impending pregnancy announcement on Michael Quartermaine (Chad Duell) and his new mob life. Sometimes soap opera writers recycle plots – comas, secret babies and amnesia, for instance – and this can be frustrating. But when showrunners script a well-crafted homage to past storylines, it can be a huge win. In the case of Sabrina’s pregnancy, it should be the latter.

This storyline could have us see history repeating itself very cleverly. Remember Michael himself was kept from biological father AJ Quartermaine and given to adopted father Sonny Corinthos (Maurice Benard) for safer keeping? Port Charles has also seen other mob/child issues. Olivia Falconeri (Lisa LoCicero) kept Dante Falconeri (Dominic Zamprogna) away from Sonny and is now doing the same to Julian Jerome (William deVry) with baby Leo. Alexis Davis (Nancy Lee Grahn) pulled it on Sonny, too.

Like so many other mob maternity and paternity cases in Port Charles, Michael started out his life as part of a struggle between his biological parents for custody. Ultimately, this turned into a life of tragedy for Michael that led him to being shot, bludgeoning his step-mother, and then losing biological father AJ at the hands of adopted dad Sonny. Nothing about that situation was good from start to finish. This will all become a factor once Sabrina finds out she’s pregnant with Michael’s baby.

Michael as he was – CEO of ELQ and benefactor who was opening a medical clinic in his dad’s name – was great. But Michael the mobster is another story altogether. Sabrina will want Michael out of the mob if they’re going to have a child together, but Michael is just getting started. No way is he going to back off and leave his dad hanging and his family in a precarious position. Right now, the mob isn’t so much a business opportunity for Michael, but a means of protecting the family.

It’s one thing for Michael to take the reins while Sonny is out of commission. But as Sonny’s convalescence turns out to be months in the making, Michael may grow to like the power and being the man in charge. And just as Michael will rebuff Tracy Quartermaine’s (Jane Elliot) overtures when she tries to reason with him about avoiding the Corinthos syndicate, Michael will not take kindly to any sort of ultimatum from Sabrina.

Morgan Corinthos (Bryan Craig) may be the family hothead, but Michael is much scarier because he’s quietly determined and is far more dangerous. Think about what Michael did to step-mother Claudia – you don’t beat someone to death unless you have an inherent capacity for violence. The problem is, all Sabrina has seen of Michael is Dr. Jekyll – she has not seen Mr. Hyde and has only heard about him from Lulu Spencer (Emme Rylan) and Maxie Jones (Kirsten Storms).

You know the saying “you have to see it to believe it”? Sabrina is about to see it. But when Michael tells Sabrina he can’t walk away from his dad’s syndicate and then gets angry at her ultimatum, Sabrina will begin to get a clue. Sabrina will either have to get on the mob bus or have it back over her. If Michael was willing to take Avery from Sonny, what lengths will Michael go to for his own child? Consider this notion about Michael – what if he got all of Sonny’s darkness and all of AJ’s too? Scary, huh?

Stay tuned to CDL for more on this and other great new plots hatching in Port Charles – and check back for daily “General Hospital” spoilers, gossip and more.