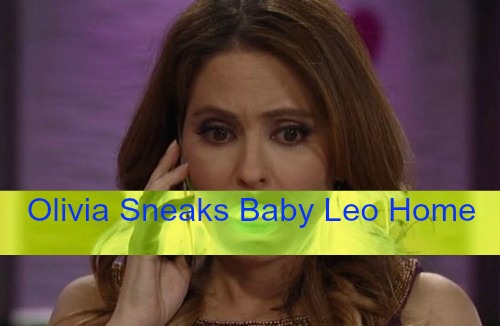 “General Hospital” spoilers reveal that, this week, Olivia Falconeri (Lisa LoCicero) will hatch a plot to bring baby Leo Falconeri back to Port Charles right under the nose of baby daddy Julian Jerome (William deVry). But how will Olivia be able to pull this off without Julian finding out and who else will Olivia pull into her plan and make accessories to her parental fraud?

Here’s what we know – Olivia has to start with the people who already know that her son is not dead. This includes Dante Falconeri (Dominic Zamprogna), Lulu Spencer (Emme Rylan), Ned Ashton (Wally Kurth), Tracy Quartermaine (Jane Elliot) and Brook Lynn Ashton. Ned and Brook Lynn are out of town, so the most immediate accomplices she’s likely to use include Dante, Lulu and Tracy.

The baby Leo shenanigans will start with a phone call from Olivia to Tracy to discuss her plan. But the question is, what could this plan possibly be? How can Olivia get baby Leo back in Port Charles without Julian realizing the baby boy is his son? Olivia will be hard-pressed to invent a cover story that will allow her to bring a male child into her home without alerting Julian – so what are the viable options?

#1 Dante and Lulu say it’s their biological child
Dante and Lulu could claim that they had their last embryo implanted in a surrogate and that’s the baby that came out. The problem with this is – Leo is six months old (give or take) and not a brand new baby. Plus, what happens when they decided to use the actual embryo and Lulu is waddling around pregnant? This is a far-fetched option but you never know…

#2 Dante and Lulu claim they adopted the boy
More believable is that Dante and Lulu could say that they decided to adopt a child because of their fertility struggles and could claim it’s a Falconeri cousin who was a teen pregnancy if they want to explain why the baby looks like it could be related to Dante. Alternately, they could say it was just a random baby they adopted. This is a plausible plot line.

#3 Tracy says it’s her great-grandson
Tracy could claim that granddaughter Brook Lynn had an unplanned pregnancy and that baby Leo is the result. She can say she’s adopting her great-grandson or say that she’s caring for the baby until Brook Lynn makes some life changes. This is a very plausible cover story because as far as Julian knows, Olivia and Tracy aren’t besties and the baby will be in the Q house, not a Falconeri home.

#4 Ned Ashton brings back a “love child”
We’ve mentioned before a persistent “General Hospital” rumor that Ned Ashton will be recast because the story line demands it – even though Wally Kurth is wildly popular. If Ned is recast, he can come back and claim that he cheated on Olivia and fathered a love child that Tracy will help raise. However, this might be obvious to Julian since Ned and Olivia were/are a couple.

The problems with any baby Leo ruse Olivia comes up with are multi-fold. Julian will take notice of any six month old boys that pop up in Port Charles in any way that’s Olivia-adjacent. And remember, Paul Hornsby (Richard Burgi) is at the Q mansion which means he’ll found out the baby is really Julian’s child. And that means Paul will leverage that fact to his benefit if he can, even if it means ruining Olivia’s plans.

Another interesting twist is that Paul could reveal to Ava Jerome (Maura West) that baby Leo is alive – perhaps to control her by threatening to kill the child – but not allow her to tell her brother. If well-crafted, this could be an interesting storyline. Ultimately, though, we know Olivia will be caught out and Julian will know his son is alive. Her fraud could then cost her custody of the boy in an ironic twist.

Stay tuned to CDL for more “General Hospital” spoilers about the fate of baby Leo and other GH gossip, rumors and casting news.