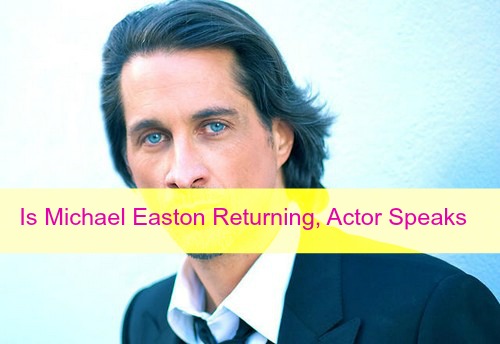 “General Hospital” spoilers and rumors have been teasing for weeks now that Michael Easton might be headed back to the ABC soap opera as Dr. Silas Clay. When CDL confirmed that Easton’s character was going to be killed off from “General Hospital,” fans of the daytime drama were furious and took to social media to let TPTB know how they felt about Easton’s exit – there were even petitions started pleading with producers to bring back the character.

Michael Easton took to Facebook on Thursday, October 8 to let GH fans know that there is absolutely no truth to the rumors that he is headed back to the ABC soap opera, however he thanked everyone for all of their support after his exit.

Easton stated, “MANY HAVE ASKED…Not sure how this rumor got started but I have not been within ten miles of the GH studio since I left in July. There were many questions about a recast or the use of a double but I have no information about any of that and you would have to ask the production. Thank you again for the kind words and for keeping me in your thoughts. Love, Michael.”

So there we have it, Michael Easton has not been asked back to “General Hospital” – and he sounds a bit bitter. Even if the GH team decided to bring Silas Clay back from the dead (which is highly unlikely right now), it sounds like Easton might even turn down their invitation to return.

It is interesting that Michael Easton mentioned the other “General Hospital” spoilers and rumors floating around that are teasing that there might be a recast. At this point, GH fans are still so upset about Michael Easton’s exit, the odds of them warming up to another actor as Silas Clay are slim to none.

Do you miss Michael Easton as much as we do? Are you sad that he is not returning to “General Hospital?” If GH does invite him back, will he turn them down? Let us know what you think in the comments below! Come back to CDL for lots more “General Hospital” spoilers, gossip and news.