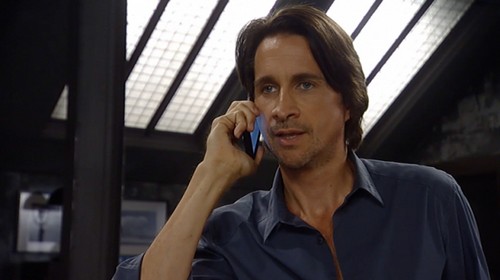 General Hospital spoilers report Michael Easton has exited GH and Silas Clay will be murdered by Ava Jerome. Breaking news confirms Michael Easton is out at ABC’s Genearal Hospital. Rumors have been flying that a male character would be killed off GH and speculations were everywhere but common sense would point to Dr. Silas Clay.

The character of Silas has been less than exciting with storyline after storyline fizzling out. Michael Easton’s character was a transplant from the defunct ABC soap One Life to Live where he was one of three who ABC tried to salvage from that wreckage – Kristen Alderson [Kiki] and Roger Howarth [Franco] were the other two. Kristen left GH months ago. Michael Easton’s character had a romance with Sam McCall [Kelly Monaco] but just when it finally started to get hot blew up when they brought wifey Nina Clay [Michelle Stafford] back from her 20 year her coma.

Silas has never really had much of a storyline that really worked within the GH dynamic – they tried to make him relevant by saving mobstress and ex love Ava Jerome’s [Maura West] life when she was diagnosed with cancer but that storyline did not go anywhere. Silas kidnapped baby Avery for bone marrow to save Ava then brought Avery back home as fast as she turned up missing – and yet no one knows he’s the culprit.

Michael Easton is a talent that could have made any part his but the storylines he was given were just dreadful. Rumor has it he will be murdered and we will be surprised who kills him – however sources tell CDL that Ava Jerome/Denise Demuccio is his killer and all because she is desperate to bury all of her awful secrets that Silas holds.  We all know how Ava tends to react when she gets desperate – the last casualty was Connie Folcaneri [Kelly Sullivan]. Now that Silas threatens her relationship with Morgan as well as her very freedom and possibly her life itself (Sonny!) if Denise is revealed as Ava! Once Silas threatens to confess to Avery’s kidnapping the trail to Ava being Denise is opened. Ava can’t let Silas confess… Stay tuned to ABC’s GH to see how Silas leaves the show and come back to CDL as we reveal more General Hospital spoilers and news every day!