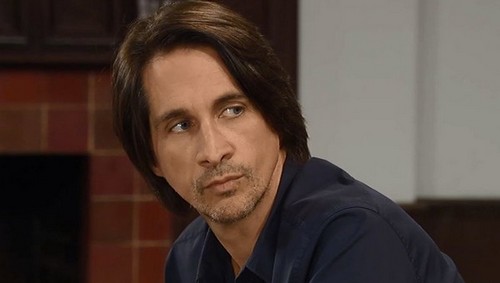 A shocking “General Hospital” spoilers reveals that a major fan-favorite male character will be killed off in a murder storyline. Rumor has it that an actor who plays a beloved character is not happy with how his character has been handled in recent months and wants out of GH to move on to better projects. So the question is whether the character planned for the murder is the same as the dissatisfied actor.

Here’s what we think. Rumor has it that neither Tyler Christopher (Nikolas Cassadine) nor Bryan Craig (Morgan Corinthos) are pleased with what’s going on with their characters. And as for characters who have been written into unpleasant situations, the obvious choice is William deVry (Julian Jerome) who had Duke Lavery (Ian Buchanan) killed off and then quit the mob and spends his time lifting weights.

Julian is pretty much at a dead end although the shirtless beefcake working out shots are nice. But it’s ridiculous that’s all he shows up for anymore. Really, most of the GH staff has been poorly utilized with the lame plots under Ron Carlivati’s tenure. But now that he’s been axed (woo hoo!) hopefully the new lead co-writers Jean Passanante and Shelly Altman can get the actors reinvested in the show.

But it looks like this murder is a done deal and the actor has already filmed his last scene and is done. So who could it be? Nik, Morgan and Julian are top choices, although Franco (Roger Howarth) is a name that also been bandied about as a possible murder victim. There’s a persistent “General Hospital” rumor that both Ava Jerome (Maura West) and Franco will be wounded, possibly killed, during a mob shoot out. And Silas Clay (Michael Easton) is another character who’s in a tight spot.

Here’s a look at the top five candidates who could be put to death in a Port Charles murder:

Nikolas Cassadine: Many people have decried the recent schemes of Nikolas because he seems to be turning into a true Cassadine. Personally, I like new and evil Nik and want him to stick around. And this seems like a less likely alternative since there always has to be a Cassadine in Port Charles as a legacy family – and the family can’t be left in the hands of brat son Spencer Cassadine (Nicolas Bechtel). I give Nik a slim 15% odds of being the character killed off.

Morgan Corinthos: Morgan is a mess – he’s either pouting about being the less-favored son or cheating with Ava. Morgan’s got no real job, no traction and seems to be just a boy toy ancillary side kick to Ava or Kiki. He’s a good looking young man and a great actor and deserves a more meaningful role. Would love it if Morgan was kept around and started running the family business with Sonny Corinthos (Maurice Benard). I give Morgan higher odds of kicking it at 35%.

Julian Jerome: This is another quality actor who has been relegated to the sidelines. Perhaps his role will be beefed up once Olivia Falconeri (Lisa LoCicero) comes back and the baby issue heats back up. But for now, he works out and makes out with Alexis Davis (Nancy Lee Grahn). His role is minimal and yawn-worthy and that’s too bad. He was better as a rival mobster. Julian is a much likelier candidate to be killed off simply because he’s become so marginalized. I give him 20% odds of impending death.

Franco: Franco has a major storyline right now with both Ava and Nina Clay (Michelle Stafford) so the notion that he would be killed off makes no sense, but the rumors are swirling that he will be shot. But hopefully he won’t be killed off. Would be great instead if the shooting made him turn maniacal again. Franco is at his best when he’s off the hook. Howarth is too deeply entrenched in many storylines to kill off so I put his odds of offing it at a slim 5%.

Silas Clay: Silas is another character who has been written into a corner. He kidnapped baby Avery and stole her bone marrow and it’s only a matter of time before this comes out. Silas is rumored to come clean to Nina about the kidnapping this week to make it clear to her that she did not take the baby. Silas is facing jail once it comes out, but if Sonny finds out that Silas took the baby, there is a good chance he would put a gun to Silas’ head. I give Silas a 25% chance of being murdered.

Which male GH character do you think has been killed off? Share your thoughts in the comments below and be sure to check back with CDL daily for more “General Hospital” spoilers and news.

Update: CDL was correct – breaking news from Daytime Confidential tells us that Silas Clay is written out of General Hospital and Michael Easton has finished filming on GH! CDL will bring you more details of the end of Silas and the whys and hows of Michael Easton leaving GH, did he quit, was he fired?