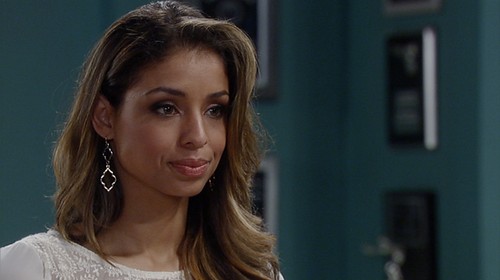 Here are some “General Hospital” spoilers for the Tuesday July 28 episode. Now that Luke Spencer (Anthony Geary) has moved on, let’s pick up the pace! Valerie Spencer (Brytni Sarpi) is kind of into Dante Falconeri (Dominic Zamprogna) but she can’t let him know it since he’s made it clear that Lulu Spencer (Emme Rylan) is all that he wants. Now that Dillon Quartermaine (Robert Palmer Watkins) proposed they date, Val will let Dante know that he’s going to miss out because she’s taking up with Lulu’s ex.

Thing is, don’t expect either Dante or Lulu to be pleased with this deal. Lulu will see this as a further betrayal from Val who smooched her hubby (at least as far as Lulu knows) and now is macking on her ex BF Dillon. This should make things interesting – could jealousy over this new couple be what finally tears Lulu and Dante apart?

Nathan West (Ryan Paevey) leaves Nina Clay’s (Michelle Stafford) hotel room very amped up. Yes he found the blanket, but Nathan is in no way convinced this is an indicator that Nina kidnapped the baby. In fact, Nathan thinks that Madeline Reeves (Donna Mills) sending him up there and the blanket just lying there is all too convenient. Nathan goes to Jordan Ashford (Vinessa Antoine) with his suspicions.

Nathan has to act fast if he’s going to save Nina from Maddy and rat fink Ric Lansing (Rick Hearst). Meanwhile Madeline will go off on her partner in crime Ric for letting Nathan find the blanket. After all, Madeline just wants Nina in Shadybrook so she can get her money. Maddy doesn’t want her only child in jail. Likely Maddy will be behind bars before Nina is though. Wishful thinking.

Silas Clay (Michael Easton) hears that Nina is being looked at for the kidnapping of baby Avery and he can’t sit idly by and let her pay for his crime. Silas may come clean to the cops at some point, but first he wants to confess to Nina so she can stop tormenting herself. But Silas better not expect Nina to thank him for this bit of news.

And Nina will head over to have breakfast with the insatiable Denise DeMuccio. Ava promised Franco (Roger Howarth) if he would keep secret her shagging Morgan Corinthos (Bryan Craig), she would amp up efforts to get Nina back in his arms. Ava/Denise takes the opportunity to gush to Nina about what a catch Franco is and doesn’t understand how Nina could let him go. Nina will wonder as well.

And while Ava shares eggs with Nina, Franco is not done with this cheating issue because he doesn’t want Kiki Jerome (Hayley Erin) hurt. Franco goes over to confront Morgan about him cheating on his GF Kiki with Denise. Morgan will try to deny it but Franco won’t hear that since he knows 100% from Ava that it’s happening. Could Franco spill the Ava secret to Morgan to try and make him end the affair?

Watch Tuesday’s GH then come back to CDL for tons more “General Hospital” spoilers and gossip.