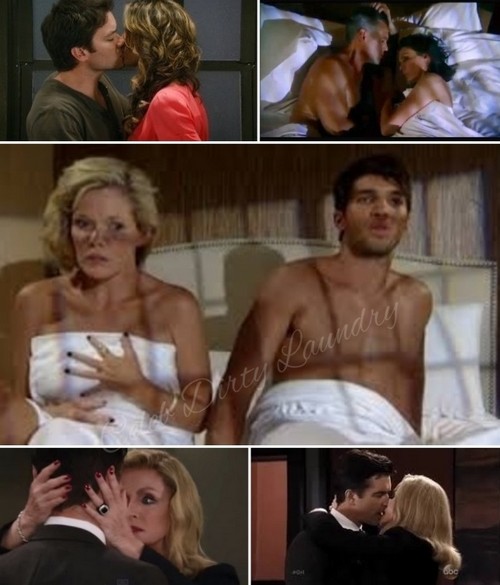 General Hospital spoilers from CDL told you that Ron Carlivati would be fired the day before the official announcement was made and here we help explain why. Carlivati made a mess as GH Head Writer and has been replaced by Shelly Altman and Jean Passanante after a series of disastrous storylines drove rating to record lows – if only Carlivati had possessed the humility to listen to GH fans he could have avoided this outcome. Is General Hospital even recognizable anymore? With the “Fluke is Luke” [Anthony Geary] debacle it seems GH has gone downhill at record speeds but we cannot rest all the blame on the Fluke storyline, let’s take a look at the whole trainwreck of current GH stoyline relationships and plot conclusions.

Has anyone even wondered what Luke was diagnosed with? This storyline ate up our every minute of GH airtime for a year yet when the”grand finale” comes Luke leaves and gets psychiatric help comes back with no diagnosis? The fans watched Luke bring heroin into Port Charles causing Dr Silas Clay’s [Michael Easton] nephew Rafe’s [Jimmy Deshler] death and put fear into every mobster who he came in contact with him – yet the fans were not important enough to deserve a “diagnosis” for this evil behavior? In response to that very question on what could make Luke do these things former Head Writer Ron Carlivati in a Daytime Confidential interview said that “We were very clear about not going down the DID path. This really was Luke giving in to the darker impulses he has. What we were going for was that this dark Luke has always existed inside of him, not completely separate.” WHAT?? So that was their reason for all of Luke’s evil, sinister, despicable behavior? He has a dark side? We all have dark sides but don’t push Heroin and commit unspeakably horrible crimes.

Then as fast as we learned Fluke was Luke he went away got some quick psyche help – then BAM he comes to terms with killing his parents, everyone forgives and forgets, and Luke is trusted and loved once again. Then bam next scene we are at Luke & Tracy’s [Jane Elliot] engagement party. PLEASE!

The next stop for the hot mess express was Laura [Genie Francis] returning and crashing the engagement party with some kind of deep dark “Lucky” secret causing YET ANOTHER failed Luke/Tracy engagement. This dominoes into the swift Lucky [Jonathan Jackson] return storyline – TPTB had Laura, Luke and Holly [Emma Sams] reunite to find Lucky being held hostage by Frank Smith who was killed by Luke Spencer 20 years ago but is now alive. We then had to watch Frank Smith be re-killed within a month and in record-breaking time Lucky finds formerly dead son Jake Webber with Helena Cassadine [Constance Towers]. 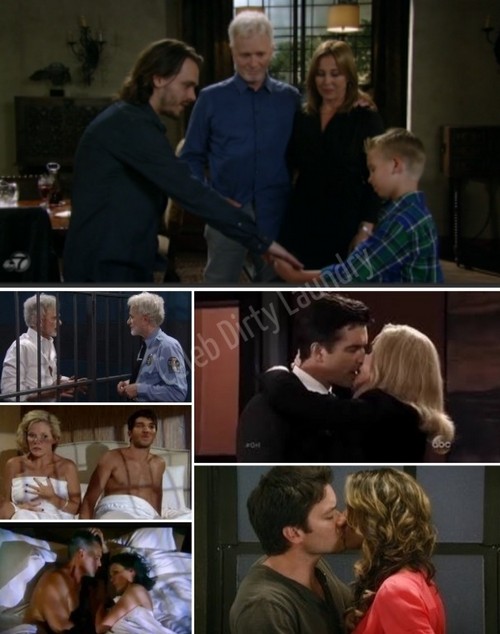 How ludicrous to dig up such an important story that left a huge mark on GH history – and all unfolding within a month. Pretty amazing considering GH is known to draw their storylines out for well over a year. They found Lucky, Frank Smith and dead Jake Webber then reunited little Jake with mom Elizabeth – Nikolas told Lucky about Jake being Jason in minutes yet he will shoot Hayden in the head for trying to tell anyone, then Lucky leaves PC as fast as he arrived like a ninja in the night. Anthony Geary made it clear how stupid he thought this all was – of course Geary knew that Carlivati was on the chopping block and so didn’t hesitate to throw him under the bus in an exit interview.

One word for all of that mess – sloppy. Sloppy also describes the couples they have thrown together. ABC soaps coined the phrase ‘Love in the Afternoon’ but have dropped the ball over and over – there is no love but only sex and break ups in the afternoon. Everyone sleeping with everyone’s mother, literally! Case in point: what is hot about Nina’s mom Madeline who is in her 70’s hooking up with Nina’s husband Ric who is in his 40’s? Nothing against love at all ages but that storyline is hard to watch even though Donna Mills is one phenomenal looking 70+yr old. We then have another mommy fetish Kiki’s boyfriend just out of his teens Morgan Corinthos and Kiki’s mom Ava Jerome. This relationship was wrong from the beginning and now continues as Ava role playing as cousin Denise DeMuccio with a horrible wig. How many of you find yoursef talking to the TV Screen “tear that wig off Morgan!!”

TPTB have torn beloved couples apart right and left like Robin [Kimberly McCullough] and Patrick [Jason Thompson] – a great couple with lots of GH history – a true love story. They are in the process of tearing apart LuLu [Emme Rylan] and Dante [Dominic Zamprogna], another fan favorite couple, with a new charcter Valerie Spencer [Brytni Sarpi], a cousin that virtually dropped out of nowhere. Never giving fans time to bond with her the majority could not stand this character even before the Dante/Valerie sex encounter – but literally hate her now as that sex scene was way over the top and in very poor taste!

TPTB have made Elizabeth [Rebecca Herbst] a despicable repulsive character who is very hard to watch as she continues to slobber all over Jake all the while knowing his true identity keeping him from his wife and son. It seemed like once Nathan [Ryan Paevey] and Maxie [Kirsten Storms] were paired up all they did was hang out in bed – then when they were out of bed TPTB got bored and decided to break them up bringing Spinelli [Bradford Anderson] and Ellie [Emily Wilson] in for a minute to tear this new couple apart – only to reunite them days later. What was the point, giving us false hope that Maxie, Spinelli & baby Georgie would be a family again – only to have Spinelli leave town without his daughter who he has raised since she was an infant?

Another hard to watch scene was Sonny [Maurice Benard] & Ava having crypt sex right after the killing of A.J. Quartermaine [Sean Kanan] – breaking up yet again another popular pairing of Olivia [Lisa LoCiCerro] and Sonny.

A very unpopular pairing is Patrick & Sam [Kelly Monaco] – such a strange uncomfortably awkward pairing. Why can’t males and females be friends on GH – it seems TPTB think all the viewers want to see are couples in bed. The most disturbing part of seeing Sam and Patrick in bed was when Sam brought Danny into the bed with her lover Patrick. That was just wrong on so many levels – why did they think we wanted to see Sam include Danny in the bedroom scenes with Patrick? Sam seemed to be wearing only Patrick’s white shirt for weeks on end – same with Patrick shirtless for weeks.

It is very clear Carlivati had no idea how to create and sustain real love stories like other writers have in the past. LOVE and SEX are different but for some reason GH did not have a clue. EVERYONE is having sex with everyone even throwing Anna Devane [Finola Hughes] in that pile right after her love Duke’s [Ian Buchanan] funeral – BAM “responsible professional” Anna ends up in bed with Sloane [Grayson McCouch], then decides it was a mistake and she leaves to take Duke’s ashes to Scotland.

Can you name one couple right now on General Hospital that has a fighting chance? When Jason is finally revealed we hope the new writing team gets it and doesn’t disappoint fans who have waited years for this reunion – from the time Jason was presumed dead. The Carlivati lead writers have made it impossible to bond with any characters or couples because they switch them and break them up on the drop of a dime. TPTB refused to listen to the fans, letting their egos run the show. GH ratings show the fruit of that folly.

Are we seeing a repeat of 2012 when the network cancelled GH – then gave them one more chance to pull the ratings up with a new writing team. ABC has given GH a new writing team once again because at this point the show is not sustainable. Let’s hope this head writing pairing of Shelly Altman and Jean Passanante can save General Hospital – they have a ridiculous abundance of talented actors to work with and a massive fan base who just needs to be treated with respect. CDL intends to support General Hospital and we wish the new Head Writers all possible success.