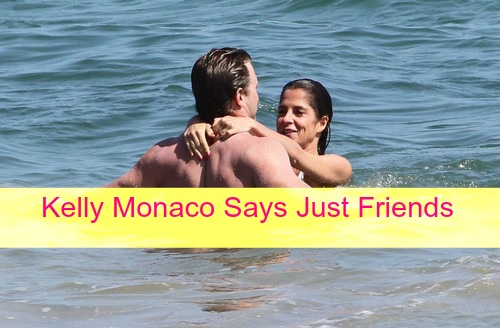 “General Hospital” spoilers teased over the summer that Kelly Monaco and Billy Miller were dating and spending just as much time together off the set of the ABC soap opera as their characters Jason Morgan/Jake Doe and Sam Morgan were spending on screen.

The dating rumors first popped up in July 2015 when Billy and Kelly attended a 4th of July party at Cheryl Burke’s Malibu home together and were photographed frolicking in the ocean. In some of the photos Kelly even had her arms wrapped around Billy’s neck and appeared to be straddling him underwater and leaning in for a kiss.

Naturally, “General Hospital” fans were thrilled by the idea of Monaco and Miller dating. JaSam fans have been waiting over a year now for Jake to realize he is Jason Morgan and reunite with his love Sam. However, Billy and Kelly’s co-stars weren’t as thrilled.

A report from GLOBE Magazine in September revealed that there was some major tension on set, and the ABC soap opera cast was not happy about all of the attention that the new on-screen and off-screen super couple were receiving. Kelly Monaco and Billy Miller’s co-stars were supposedly jealous of all the attention they were receiving, and scared that they would lose screen time to the actors.

Kelly Monaco and Billy Miller have been mum regarding their relationship, neither Kelly nor Billy would confirm nor deny that they were dating … until now. Kelly sat down with CBS Soaps In Depth to discuss her relationship with Billy Miller, and she insists that they are “just friends.” Kelly dished to the magazine, “Billy has become a very good friend. I’m one of the only single people on the show and so it Billy. So we hang out with friends and socialize outside of work.”

Yeah, we aren’t buying it either. It sounds like Kelly is just trying to downplay her relationship with Billy Miller to take some of the heat off from them. We all saw those ocean pictures, and there was nothing “friendly” about their swim together. What do you guys think? Are Kelly and Billy still secretly dating, is she denying the claims to save face? Or was it all just a highly unlikely misunderstanding? Let us know what you think in the comments below! Come back to CDL for all the General Hospital spoilers and news!

Kelly and Billy at Santa Monica by FameFlynet