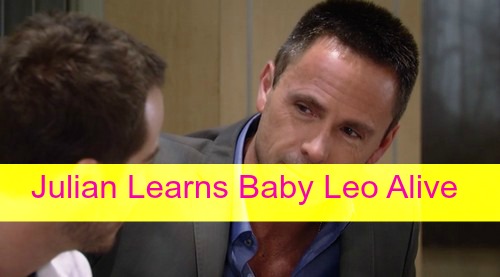 On the Wednesday, October 21 GH episode, Julian Jerome (William deVry) gets a baby shocker – this “General Hospital” spoilers reveal what will go down after Julian finds out his son Leo is still alive and that Olivia Falconeri (Lisa LoCicero) has been lying to him for months.

You would expect Julian’s reaction to be volcanic when Alexis Davis (Nancy Lee Grahn) shows him the DNA results she got from the pilfered pacifier – and it is. Julian is ready to run to the MetroCourt, confront Olivia, and snatch his son out of her arms.

But then Alexis talks him down. Once Julian gets past his initial shock, Alexis gets him to hear her out. Alexis will remind Julian that she initially did the same thing with her child with Sonny Corinthos (Maurice Benard) – Kristina Corinthos Davis (Lexi Ainsworth) – because of concerns about Sonny’s mob life.

Julian will remind Alexis that he’s no longer in the mob. Alexis will remind Julian that he was still leading the Jerome organization when Olivia told him the baby lie.

Alexis will also tell Julian that Olivia also similarly hid Dante Falconeri (Dominic Zamprogna) from Sonny but not to hurt Sonny – or Julian now – but to protect her children. Julian will consider all that has gone down recently.

He had Duke Lavery (Ian Buchanan) killed, then Carlos Rivera (Jeffrey Vincent Parise) tried to kill Sonny – as far as Julian knows – then turned up dead himself. Plus, with Sonny in the hospital having barely survived the attack, Julian has to admit the concerns are valid.

William DeVry spoke to Soap Opera Digest about the baby Leo revelation and said, “He [Julian] doesn’t quite know what to make of the feelings that are ripping through him. There’s a bit of shock, of course, but his immediate response is anger and resentment, and it goes from there.”

Fortunately, Julian has Alexis there to make him see the sensible strategy is not to blow up and make threats but to come at this calmly and directly. Julian will take his sweetie’s advice on this all-important matter.

Alexis will help Julian focus on the fact that this is not bad news, but good news. Little Leo is alive and that means Julian can be a father to him. Alexis wants him to play it cool because if the custody war gets ugly, he doesn’t need to give Olivia any ammunition to use against him in court. But the good news is, it doesn’t look like another messy Port Charles mob kid custody battle will blow up in this case, thanks to Alexis’ cooler head prevailing.

Instead, Julian will talk calmly with Olivia and tell her they had the baby DNA tested and he knows that she didn’t adopt and that it’s Leo. Julian will tell her that he knows why she lied and gets that she wants to protect her son from mob danger.

Julian reassures her that he is 100% out of the mob and is only in the newspaper business now. He tells her he wants to co-parent and share custody of their son and that they can keep Leo safe and be friends that cooperate in this matter.

Olivia will not have much of a choice but to agree to amicable joint custody. Lisa LoCicero told Soap Opera Digest, “She [Olivia] knows that the lies she has told could get her into very hot water, could even get her sent to prison.”

There’s a multitude of civil and criminal charges that Julian could bring against Olivia, but he doesn’t want to do that. He just wants access to his son since his other two kids – Sam Morgan (Kelly Monaco) and Lucas Jones (Ryan Carnes) – didn’t know him until they were adults.

This will all work out very nicely – for now at least. There are some “General Hospital” rumors swirling that Paul Hornsby (Richard Burgi) will task Ava Jerome (Maura West) with getting her big brother back into the Jerome syndicate.

Will Paul leverage Ava so hard that she pulls out all the stops to get Julian back in the cartel? And what would Julian going criminal again mean for his relationship with Alexis, Olivia and – most importantly – baby Leo?