General Hospital (GH) Spoilers: Jake Dumps Liz at the Altar After Sam and Patrick Get Married 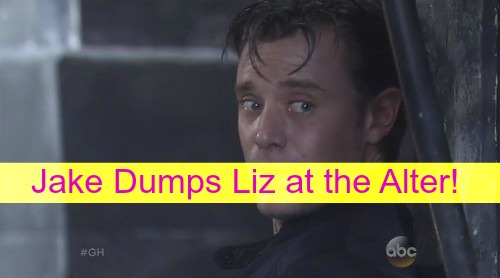 The countdown to Jake’s big reveal is getting close – these “General Hospital” spoilers looks at the fate of the engagements of Jake Doe (Billy Miller) and Liz Webber (Rebecca Herbst) as well as Patrick Drake (Jason Thompson) and Sam Morgan (Kelly Monaco).

What we do know is that Jake will figure out he’s Jason Morgan prior to walking down the aisle, but will keep this information to himself for a couple of reasons.

First, Jake is testing Liz to see why she’s lying and what her end game is. Second, Jake has to figure out what it means to be Jason in a world where he still doesn’t have his memories and “Jason Morgan” is nothing but a name to him.

He knows he has a wife in Sam, but loves another woman and that woman – Liz – has been plotting with Nikolas Cassadine (Tyler Christopher) to keep him in the dark. Jake is reeling and unsure how to proceed.

All signs point to Jake letting this ride out all the way down to the wire. That means he’ll let Liz put on the white dress and walk down the aisle but then will dump her on the spot to humiliate her for lying to him.

This is a curious homage to Liz’s last public humiliation where Carly Corinthos (Laura Wright) called out Ric Lansing (Rick Hearst) as a liar. Liz dumped Ric and now karma will come for her and she’ll be dumped publicly.

But what’s interesting about this is a “General Hospital” rumor swirling that Sam and Patrick may already be hitched at the point that Liz and Jake split and Jake is revealed as Jason. Since Patrick and Sam have both been married before, they may not care about having a big event.

Second, since Patrick’s last attempt at a wedding – to Sabrina Santiago (Teresa Castillo) – was blown up at the last minute, he may be gun shy about a public wedding.

Sam and Patrick want to be married and move on with their lives and also don’t want to steal Liz and Jake’s thunder by announcing their wedding at the same time. Looks like they may slip off quietly and get married with the intention to announce it to their loved ones AFTER Liz and Jake tie the knot. This means that Patrick and Sam could be sitting there at Liz and Jake’s wedding, happily married, only to find out that they’re in a bigamist marriage.

How will Sam and Patrick react? Will they admit they got married or will they make private plans to quietly have their marriage invalidated? And, there’s a question of whether their marriage might technically be legal.

If Jason was declared dead and Sam has a death certificate in hand, then she was within her legal rights to wed Patrick. But will she stay with him? The Sam and Jake wedding is set for November 6th.

There are GH rumors that Billy Miller will take time off at the start of the year because he’s had a hectic shooting schedule because his story has been front and center for months. Based on this, it’s possible that the Jake is Jason reveal comes out, then Jason finds out Sam married Patrick and it’s all too much for him. Jake could leave Port Charles without a word to anyone – not to stay away, mind you, but to try and get his bearings and regain his memories.

If Jake left town after the reveal, it would leave everyone else to pick up the pieces, and wonder whether he’s coming back. That would give Sam the space to figure out whether she wants to stay with Patrick or try and make a new start with amnesiac Jason.

No matter what happens at the Jake and Liz wedding, it will be epic. We know they won’t get hitched and that Liz will finally be held accountable for seven months of lying. Everything else will be icing on the Jake cake.

Stay tuned to CDL for more on the Jake reveal and other “General Hospital” spoilers, gossip and more.