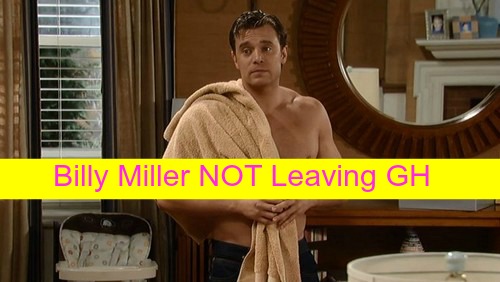 This “General Hospital” spoilers takes a look at the new casting call by GH showrunners to see what this new part is about and who the new character may impact. The official casting notice says the ABC soap is looking for a “bonafide leading man” who is Caucasian, sexy, dynamic and charismatic, between the ages of 32 and 37. It’s a contract slot that would start shooting in November which would mean he would be on screen starting anywhere from late November into early December. But who is this man?

There are two broad options – either it’s a recast of a legacy character or an all-new character. Most likely, it’s a new character. The new co-head writers have been consistently breathing new life into Port Charles, most recently by recasting a SORAd version of Josslyn Jacks with Eden McCoy and now with Darby (Jesica Ahlberg), the new college pal of Molly Lansing Davis (Haley Pullos) who’s slated to stick around for a while.

Our fingers are crossed that this is a new guy and not a rehash character. But would could it be? Well… General Hospital, as in the hospital itself, is short on doctors, so it could be a medical pro. And Lord knows, Port Charles does NOT need another mobster, lawyer or cop, so hopefully we can strike those off the list. One character we’ve heard about off and on for six months is an ex of Hayden Barnes (Rebecca Budig) that could come to Port Charles and stir up trouble. Could this new guy be her ex-guy?

Hayden is on the cusp of both a major romance with Nikolas Cassadine (Tyler Christopher) and a revenge plot against him and we know she has an unseen partner. Is it this the character GH is casting for now? One of the actors we know that has auditioned for the part is fitness model and sexy Brit Andy Ashton – no relation to GH character Ned Ashton – but the name is humorously reminiscent. Andy posted a pic on his Instagram outside the GH set and we have to say, the guy is gorgeous.

Another rumor is that it could be a recast for Patrick Drake since Jason Thompson’s contract is up at the end of the year and he’s rumored to want to pursue other projects including his music. Other GH casting updates include that Diane Miller (Carolyn Hennessy) is back soon, Damien Spinelli (Bradford Anderson) won’t stick around too long – maybe a week or two – and Ned Ashton (Wally Kurth) came back for one day of shooting which could translate to a couple of episodes worth of appearances.

GH was also casting for a new African American male cast member as a recurring character and there’s a silly rumor promulgated by ridiculous soap sites that Billy Miller aka Jake Doe/Jason Morgan is leaving or taking temporary leave from GH – he is NOT. Billy Miller isn’t checking out of General Hospital nor even considering that option.

In fact, Miller has another year’s worth of contract left, but may take a short break at the beginning of the new year since he’s been working non-stop because his Jake/Jason plot has been so pivotal. The guy needs a break and also enjoys doing other acting work, a key reason he signed with GH and left Y&R. Billy praised GH mentioning that he appreciated their policy of allowing actors flexibility and trying out other acting gigs.

Come back to CDL for more on the casting update for the new male lead as news breaks and be sure to check back with us for detailed daily “General Hospital” spoilers, gossip and more!