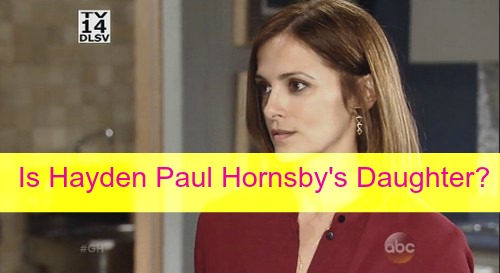 In today’s “General Hospital” spoilers, we take a look at what Hayden Barnes (Rebecca Budig) has up her sleeve and who she’s working with against Nikolas Cassadine (Tyler Christopher). We don’t yet know who Hayden’s partner is, but whomever it is has a vested interest in her working at ELQ. Could Hayden be Paul Hornsby’s daughter?

Hayden got the job out of Nikolas and now we have to wonder what she’s going to be up to there. Her goals at ELQ depend directly on whose dirty work Hayden is doing – in addition to her own.

It’s safe to assume that Hayden is not an independent operator who’s in charge of this operation. After all, Hayden was brought into town by Ric Lansing (Rick Hearst), as far as we know, so she was not the brains behind the decision to come to Port Charles.

From there, Hayden took Ric’s money to mess with Jake Doe (Billy Miller), then took up with Nikolas, then caught a bullet to the cerebellum. What’s obvious is that Hayden wants revenge against Nikolas for the attempted murder. But there’s more.

Paul Hornsby (Richard Burgi) may be Hayden’s boss. If Hayden is working for Paul, she’s likely going to poke around ELQ to help set up the Jerome money-laundering operation. Paul could have sent Hayden in as an advanced operative and used Ric as an excuse. But that plan may have gone off the rails because of the shooting and amnesia.

But Paul may have filled Hayden in on her past. Heck, Paul may even be Hayden’s father. He’s the right age to be her daddy dearest – Hayden could actually be Susan Hornsby!

Helena Cassadine (Constance Towers) is another option as Hayden’s partner in crime. Hayden may have come into Port Charles courtesy of the invitation from Ric, then was almost killed by Nikolas’ assassin.

Then, when Nikolas told Hayden the lie that she knows his grandmother, Hayden might have hit up Cassadine Island on speed dial and had a very illuminating chat with his evil granny and it could have been Helena who helped Hayden come up with a revenge plan against her grandson. Helena is mad enough over her Greek exile to plot against Nikolas.

Tracy Quartermaine (Jane Elliot) is another candidate for Hayden’s partner. After finding out that Nikolas both shot her and stole ELQ, Hayden could have gone to the former ELQ CEO and offered to dig up some dirt for her on Nikolas’ takeover at ELQ in exchange for a payday.

Plus taking ELQ away from Nikolas would be just a small start on the road to revenge against Nikolas for both Tracy and Hayden. Tracy won’t like working with Hayden, but she would do it to get back her dad’s company from the corporate snake who stole it through sketchy means.

Ric Lansing is a viable candidate for a partner for Hayden because she knows he brought her to town to mess with Liz Webber (Rebecca Herbst). Ric would definitely be open to almost any revenge scenario at this point.

Ric is mad at everyone since he was dumped by Liz and then by Nina Lansing (Michelle Stafford) too. Ric needs money and is ready to lash out at almost everyone in Port Charles aside from his own daughter. Of course, Ric is the last person you’d want since literally nothing ever works out for him. So Ric is a less likely option for her partner, but you never know…

The least interesting possibility of all is that Hayden is just plain Hayden – some chick who was willing to take money to pretend to be someone’s wife and is nothing more than an opportunistic grifter who has another small scale grift going on over at ELQ as part of a modest revenge scheme against Nikolas.

Personally, I’m hoping it’s something way more explosive like a partnership with Paul or Helena. Fingers crossed she’s working with someone that can stir up significant trouble with the sexy amnesiac!

Stay tuned for more on Hayden’s revenge plans as they unfold. Be sure to check with CDL for more “General Hospital” spoilers, gossip and more – every day of the week!