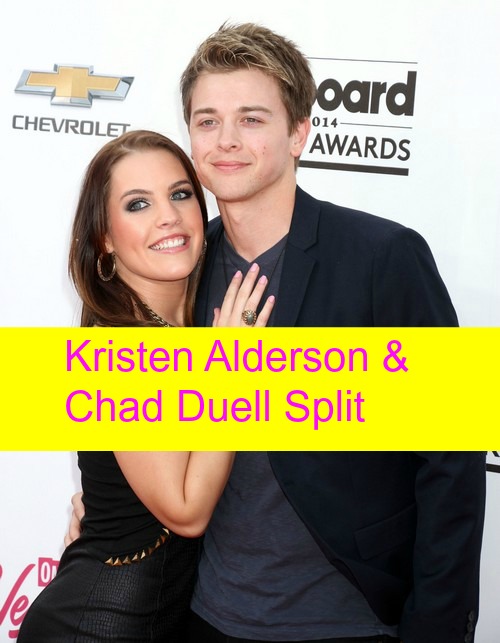 “General Hospital” (GH) spoilers are in and it is splitsville for a real-life soap couple. Chad Duell and Kristen Alderson met on the set of the ABC soap opera, “General Hospital.” Apparently, right away they felt a connection, and sparks flew.

Their relationship seemed to be going well; the couple bought a home and dog together. Today, Kristen Alderson posted to Twitter revealing she is beginning a new chapter in her life and moving out of L.A. Her followers immediately picked up on her implying that her relationship with Chad was over.

Kristen’s tweet read, “Goodbye L.A. and to a new chapter of my life. I will always love you @duelly87 thank you for always being my best friend.” It seemed like she was telling Chad good-bye in the mysterious tweet; the actress has not checked back in on social media to clarify her intent on the vague status. 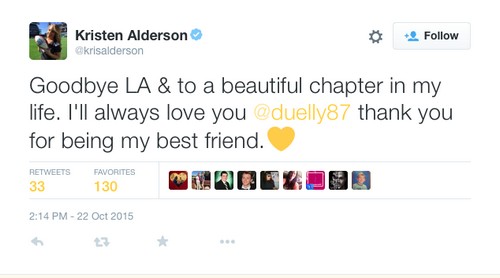 It isn’t clear if the couple broke up, or if they decided to embark on a long distant relationship. Fans have speculated for quite some time that the once happy couple called it quits. The first clue was when they stop posting pictures together.

Kristen used to share selfies with Chad fairly often to Instagram and Twitter. Recently, her selfies have been her and her gorgeous dog – Chad has not been in any of her pictures in quite some time.

Kristen was reportedly having trouble finding acting jobs since her exit from “General Hospital.” She reported that despite her experience, she was forced into taking acting classes. Kristen said that movie acting was much more competitive than soaps and felt as if she may never find her ideal role.

Kristen revealed that she has moments where she regrets leaving “General Hospital.” Do you think Kristen Alderson and Chad Duell broke up? Don’t forget to come back later to CDL for more juicy “General Hospital” news, spoilers, and rumors.