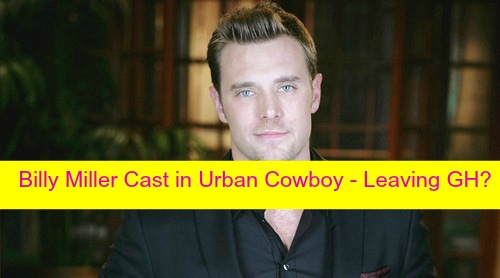 Is Billy Miller leaving “General Hospital?” When “General Hospital” spoilers confirmed last year that Billy Miller was headed to GH as Jake Doe – Jason Morgan – GH fans were obviously thrilled. But, they were also a little confused – after all Miller left “The Young And The Restless,” so that he could pursue a career in primetime. Why the sudden change of heart?

Well, it looks like there wasn’t a change of heart – Billy Miller’s end goal was still landing a primetime gig, and he has done just that in the new FOX drama “Urban Cowboy.”

News broke over the summer that FOX was casting for a pilot drama, “Urban Cowboy” – which is a TV adaptation of the iconic 1980 film starring John Travolta. The TV show will take place in Texas, and will focus on a rodeo star, who is also involved with a Mexican drug cartel, and has links to the oil industry – of course there will be a ton of romance, sexcapades, and family drama too.

According to IMDB, “General Hospital” star Billy Miller (Jason Morgan) was cast as a character named Bobby, and it looks like it might be a leading role. We say that for two reasons – the first being the obvious, the characters in the pilot episode of a new drama tend to be relevant throughout the season. And, secondly – his name is towards the top of the cast list on IMDB, which also is a good indicator that the character is central in the show.

FOX is currently working on the pilot episode of the drama, and according to Deadline they are hoping for a 2016 midseason premiere (which would be around the Spring 2016).

Now, what does this mean for Billy Miller’s character Jason Morgan? Would he actually leave GH if “Urban Cowboy” turns out to be a hit? The TV show is filming on location, in Houston, Texas – so it’s not like he can just take a cab to in Los Angeles from one set to another.

We love to see our favorite soap stars prosper and grow – but at the same time we hate thought of losing them. We really love Billy Miller on “General Hospital” and in many ways he is the highlight of GH these days – we are just a few weeks away from the Jason Morgan reveal that we have been waiting months for.

What do you guys think, is this a sign that Jason Morgan could be on his way out of the ABC soap opera? Will Billy be able to juggle “General Hospital” and “Urban Cowboy?” Will GH recast Jason once again if Billy can’t work around his primetime commitment? Share your thoughts in the comments below and check CDL often for more “General Hospital” spoilers and news!