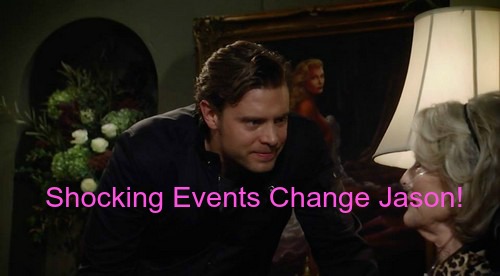 What will she reveal? Did Helena have Jason busy on an international killing spree? Worse yet, are there interactions between Jason and his son, little Jake Spencer (James Nigbor), that he can’t remember? Was Jason involved in Helena’s project of “programming” Jake to be a mini-me killer? With Helena, there is absolutely no telling!

What happened with Jason is so bad that even Sam Morgan (Kelly Monaco) will be stunned – and she has always been very accepting of his criminal activities. And Liz Webber (Rebecca Herbst) will come out of this encounter with Helena more scared than ever about her secret coming out that she’s known for months that Jake was Jason.

And if Nikolas Cassadine (Tyler Christopher) knew all of this all along, no doubt he’s going to be shunned all across Port Charles – and likely physically threatened by Jason again for letting his grandmother rip apart his life at the seams! No one leaves Cassadine Island happy…

Back in Port Charles, Carly Corinthos (Laura Wright) will go on a rage bender when she finds out from Nathan West (Ryan Paevey) that Franco (Roger Howarth) has been released from jail. She’s convinced that Franco decided to serve up some ice-cold revenge and intentionally ran her off the road.

Carly is on the warpath and shocked when Nathan says Franco didn’t do it – Kiki Jerome (Hayley Erin) is the culprit. Carly will want to believe it was Franco but will have to acknowledge the truth. But then a new crisis emerges as she realizes Morgan Corinthos (Bryan Craig) is spiraling mentally and ran off with Kiki.

Carly heads to the gym to talk this all over with Sonny Corinthos (Maurice Benard), but he’s got drama of his own brewing. Epiphany Johnson (Sonya Eddy) will terrorize Sonny today over his screw ups with physical therapy and tell him he’s going to be stuck in that chair for good if he doesn’t get his a** in gear.

But that’s just one small slice of the sweat-laced drama at the gym. Patrick Drake (Jason Thompson) is there taking out his Sam-related frustrations on a punching bag – side not, should a surgeon be boxing and putting his digits at risk, particularly a BRAIN surgeon?

Sonny and Patrick discuss the Jason reveal and how it’s impacting each of them. Sonny says Jason rejected him and doesn’t know him from Adam’s house cat and Patrick tells him he’s going to lose Sam as a result of Jason’s return unless something drastic changes.

Patrick is attached to Danny Morgan and the life he built with Sam and she’s flushing it away for a hitman – that’s what Patrick sees. Sonny sees the best friend he’s ever had died, then come back, and turned his back on him – it’s adding insult to emotional injury. With they be able to help each other out before Carly shows up?

By the end of Friday’s episode, Jason will be reeling from Helena’s shocking revelations – Carly and Sonny will be frantic about Morgan’s crazed run from Port Charles – and Nikolas will be scared of the fallout from his grandmother’s reveals. So much to see today – do NOT miss this episode. Then come back to CDL for a look ahead at all of the action next week in Port Charles with “General Hospital” spoilers for the week ahead!