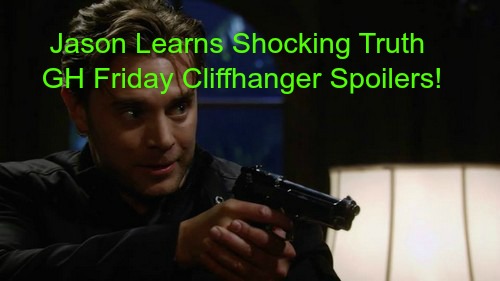 Check these “General Hospital” (GH) spoilers for the Friday, November 20 episode and see what will happen with Jason, Liz, Sam, Sonny and more. It’s cliffhanger Friday tomorrow! First, Jason Morgan (Billy Miller) is determined to get the truth out of Helena Cassadine (Constance Towers) despite the fact that she’s on her deathbed and looking frail.

Nikolas Cassadine (Tyler Christopher) wants her to zip it – and so does Liz Webber (Rebecca Herbst) but Helena claims she wants to make peace before she meets her maker and goes off to whatever plane of hell to which she’s been assigned – although Helena seems to think it will be happier great beyond experience with her Mikos.

What tidbits will Helena offer on tomorrow’s show? She’s already hinted that she’s willing to talk about little Jake Spencer (James Nigbor) and will have some stunning information for him about his accident. Will she tell him that he was with Robin Scorpio (Kimberly McCullough) before he was run down? And it’s likely that Helena knows who really ran him over since she had henchmen in Port Charles looking for Jason. Will she reveal it was Ava Jerome (Maura West) that treated him like a speed bump?

Back in Port Charles, Carly Corinthos (Laura Wright) drops by GH and she and Patrick Drake (Jason Thompson) have a chat about the Jason reveal. Patrick says he thinks Jason will do anything to get the answers he wants – even if it means choking the life of Nikolas’ evil granny. Carly is glad Jason is back but upset that he’s rejected both she and Sonny Corinthos (Maurice Benard) as part of a life he doesn’t remember.

Carly hopes Jason gets his memories back but Patrick worries about what it will mean for him, Emma Drake (Brooklyn Rae Silzer) and Sam Morgan (Kelly Monaco). Carly’s worse half, Sonny, is at the gym with Epiphany Johnson (Sonya Eddy) and she writes Sonny a big fat reality check.

Epiphany flat out tells the wheelchair-bond mobster that he’s going to be stuck in that chair for a long time if he doesn’t chill and do what she says. Sonny will not take well to the slap down but she means it.

Over at the PCPD, Nina Clay (Michelle Stafford) is determined not to let Franco (Roger Howarth) pay for the sins of Kiki Jerome (Hayley Erin) and tells Nathan West (Ryan Paevey) that Kiki is a raging drunk who was at the Haunted Star party and stole Franco’s car.

She’ll explain that Franco is covering for Kiki. Problem is, Kiki is nowhere to be found and Franco will still try and cover for her. Plus, Nathan is not the sharpest spoon in the drawer. We’ll see if he figures out that Nina is 100% right and cuts Franco loose.

And Kiki may be in much hotter water than she thinks even if she’s evading arrest for crashing into Carly. She’s with Morgan Corinthos (Bryan Craig) who takes her to a cabin in the woods then starts talking nutso about them moving in together and staying there.

Kiki will wonder what she’s gotten into by leaving town with Morgan and exactly how far off the rails he is. Will Kiki sneak off and try and call Carly to tell her what’s going on? And, if so, will Morgan have a meltdown that turns scary?

All this and more on tomorrow’s show – watch then come back to CDL for “General Hospital” spoilers for all of next week including the Thanksgiving episode.