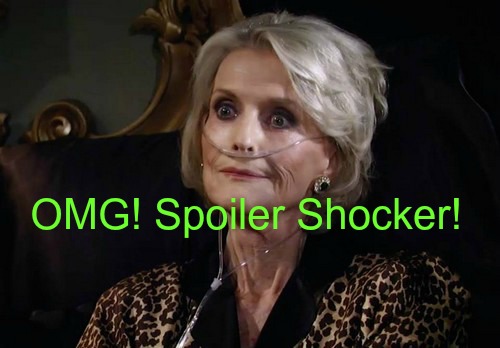 “General Hospital” (GH) spoilers indicate that Jason Morgan (Billy Miller) makes it to Cassadine Island and invades the home/prison of Helena Cassadine (Constance Towers) with a vengeance. We’ll see the assassin side of Jason comes out (that Jason hates about himself) as he works room to room taking out Cassadine private security forces until he makes it into Helena’s inner sanctum. By that point, she will no doubt know he’s coming for her – and of course she knows why.

We’ve never seen Helena cower in fear and don’t expect to now. In fact, Nikolas Cassadine (Tyler Christopher) probably called up his murderous mee-maw to warn her that Jason is on the warpath. Helena will be waiting, much like a spider waits for a fly to fall into its web.

Don’t expect her to beg for her life, though. Instead, she’ll taunt Jason to make it clear that she’s toyed with him and used him as she wanted and there wasn’t a damned thing he could do about it.

We’ll see Jason wrestle for control of his emotions. On one hand, he’ll want to throttle her for what she’s done. Mostly, Jason wants her to undo his damage – too bad she can’t. The microchip was bad news for his brain, but so was the accident when Ava Jerome (Maura West) ran him down.

Helena has no solutions she can personally enact, but has an asset that could help him. Will it be Robin Scorpio (Kimberly McCullough) that’s been held on the island and working on more brain-related research?

Helena will not be hale and hearty when Jason finds her. Looks like Nikolas wasn’t lying about his grandma’s frail state. She’s bedridden and on oxygen. Is that why she’s been holding Robin? Is Helena suffering ill-effects that Robin’s research could cure?

And could that same research benefit Jason and possibly restore his memories? We also know from “General Hospital” spoilers and leaked photos that Liz Webber (Rebecca Herbst) and Sam Morgan (Kelly Monaco) will catch up to Jason soon.

All three will be angry and confrontational with Helena – but it’s Liz and Jason that will get the biggest shocks when Helena drops some details about what went on with their son little Jake Spencer (James Nigbor) while he was with her for years on the island.

Will Helena taunt Liz and say she was a mother to Jake while Liz was not around? Will she imply that she did things to Jake’s brain as well? Will anyone finally get a clue that the kid is “off” thanks to his time with horrible Helena?

The bottom line is – Helena will string Jason along for a while but will ultimately give him the answers she has – which are not enough. Helena has no magic bullet to bring back the memories or time he lost. But Robin may have what he needs.

Will Helena admit that she has Robin or will Robin bust free of her captors long enough to get to the invading force of Jason, Sam and Liz? Looks like we should have a Robin-Jason face to face in the next few days. Can’t wait!