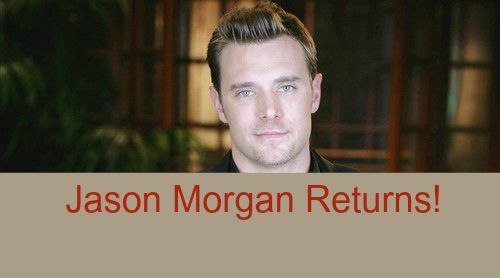 This “General Hospital” spoiler is urgent! This is big news for Friday’s cliffhanger episode on September 25. Read to find out more about Jake Doe’s (Billy Miller) memory lapse and how Sam Morgan (Kelly Monaco) will come close to a realization about Jason on their wedding anniversary – and right where their wedding went down at Noodle Buddha.

We all saw that Sam had the phoenix and dragon figurines with her in her purse – remember she showed them to her dad Julian Jerome (William deVry) at his apartment. Sam then heads over to Noodle Buddha to reminisce about her lost love Jason Morgan on what would have been their fourth wedding anniversary. And who comes up on her in the very courtyard where they got married?

It’s Jake, of course. Also recall that Jake was mumbling wedding vows in his sleep – on the morning he woke on his anniversary. Jake’s conscious mind may have no clue about the importance of this date, but the deeper recesses of his brain certainly know about it and it seems like his memories are trying to break through the fog around his brain. And we’ll see some progress on that front.

Jake sits down with Sam and she recounts the events of her wedding after admitting that Patrick Drake (Jason Thompson) proposed to her. But when she explains the significance of the dragon and the phoenix, Jake’s brain will start to tingle. If he touches those figurines, we will see a jumble of memories flood in on Jake. This could be the big breakthrough moment for Jake when he learns that he is Jason Morgan – or at least that he shares the memories of Jason – he has Jason is in head, all thanks to Sam.

What’s also important about the dragon and phoenix figures is a reversal of roles. When they got married, Jason was the dragon and Sam the phoenix, but now it’s a swap. Jake is Jason rising from the ashes like the phoenix and it will be Sam who reacts like a dragon when she finds out what Liz Webber (Rebecca Herbst) has done – with flames, fury and claws out!

Here’s what we know about the “Jake as Jason” reveal. It won’t be official until November sweeps, but Jake himself will know long before then. Jake will figure out his identity, but play it close to the vest so he can try and figure out what this means. Jake will know he’s Jason, but little else. Jake will not suddenly have a reverse-amnesia event and remember everything.

All Jake will have is a litany of facts – he’s little Jake’s dad, Sam’s husband, Danny’s father, Monica’s son, Michael’s uncle, and Sonny’s BFF. These are all people he’s interacting with already and has an affinity with and affection for, so he’s not missing out on anything, at least for now, by not revealing himself to them. Jake has to figure things out, but he and Sam’s wedding anniversary is the big trigger.

And for Sam, she will find herself feeling inexplicably drawn towards Jake even though they are solidly in the friend zone. Rumor has it that Sam and Jake get close to a kiss but stop short of a lip-lock as both realize they are on strange ground given they’re involved with others. However – this is likely just gossip – and I doubt we will see the two get within smooching distance. (But it would be great if they did).

Friday’s show is not to be missed if you’re a JaSam fan. Expect a gut-wrenching cliffhanger and memories that will have Jake questioning everything. Be sure to check back with CDL for more “General Hospital” spoilers on Jake’s reveal and more – we’ve got good stuff every day.