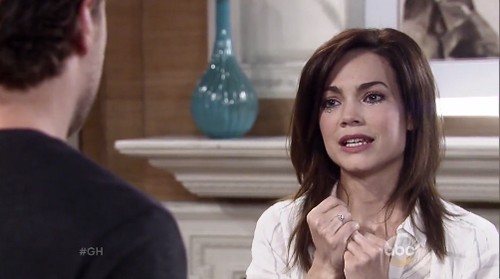 Here’s some “General Hospital” spoilers for the week of September 23 through September 25. This week, mob secrets unfold and relationships struggle in Port Charles.  Sonny Corinthos (Maurice Benard) came through surgery with flying colors and is recovering nicely, but he’s still got a long road ahead. Sonny has to do a lengthy physical rehab so he can’t protect the family or run the syndicate. Michael Quartermaine (Chad Duell) will step up in a big way. He vows to keep the family safe while Sonny can’t be there.

Looks like Jake Doe (Billy Miller) will pledge his dangerous skills to Michael and will be by his side at the Corinthos syndicate just like he did for Michael at ELQ. But first, they have to deal with Morgan Corinthos (Bryan Craig). Morgan is off the rails and winds up in hospital after threatening to shoot Julian Jerome (William deVry).

Michael and Carly Corinthos (Laura Wright) try to get Morgan to go see Dr Kevin Collins (Jon Lindstrom) but Morgan refuses. Julian appreciates that Alexis Davis (Nancy Lee Grahn) defended him to Morgan and stood by his side at peril to her own life. Later, Alexis goes looking for answers about the mob violence and asks Paul Hornsby (Richard Burgi) for help. 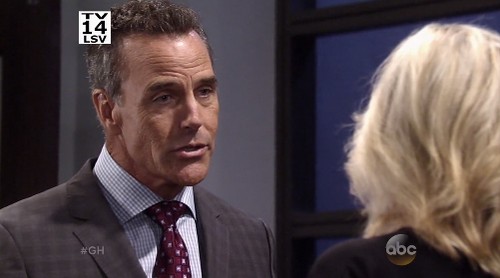 Why Paul? Looks like Paul could end up as Port Charles latest DA after rat fink Ric Lansing (Rick Hearst) is fired from the job. Paul orchestrated the firing by stealing the flash drive from Scotty Baldwin (Kin Shriner). That means Ava Jerome (Maura West) is off the hook for good. Paul reveals all this to Ava but then also leverages her to do something she doesn’t want to, act as the Jerome Family crime boss.

Free of the threat of murder charges now that the flash drive is out of play, Ava contacts Scotty for help with a custody case to get baby Avery back. Ava has a major confrontation with Carly over Avery. With Sonny out of commission and Ava the only parent on her feet, she wants her daughter back and does something outrageous. Carly will make a counter-move.

Julian turns to Sam Morgan (Kelly Monaco) and she’ll agree to help him out. But is this to do with the attempt on Sonny’s life and the subsequent threats on Julian’s life? Or does it have something to do with her mom Alexis instead? Sam has lots on her mind this week since Patrick Drake (Jason Thompson) proposed and it’s her anniversary with Jason Morgan.

Sam wanders around Port Charles thinking about the man she lost and the new man she has. Interestingly, Sam will run into Jake at the Chinese restaurant where she and Jason tied the knot. Sam tells him about the proposal and Jake and Sam bond. Sam will ultimately say yes to the proposal. Jake tells Liz Webber (Rebecca Herbst) about these events and she seethes.

Liz does much more lying this week. When Sonny tells Liz that he thought Jason was with him at the shooting scene, Liz tells him it’s the trauma talking. Liz and Jake will also set a wedding date. Wow – this week will see both Sam and Jason engaged to other people even though they’re still married. Will Liz really go the bigamy route and illegally marry Jake?

Dillon Quartermaine (Robert Palmer Watkins) spends time hanging out with his dad Paul and Maxie Jones (Kirsten Storms) spends time Tracy Quartermaine (Jane Elliot). Tracy isn’t pleased with Paul cozying up to Mayor Lomax (Saidah Ekulona) and Maxie notices she’s jealous and asks about Tracy and Paul’s past. Tracy fills Maxie in which will serve as a history lesson for newer GH fans to explain Paul’s past with the DVX cartel and their forced marriage.

Anna Devane (Finola Hughes) gets asked to do something interesting this week? What’s up with Anna? Hmm… And, Olivia Falconeri (Lisa LoCicero) is tired of being apart from baby Leo so she contacts Tracy for help concocting a cover story and launching a plan to get the baby safely back to Port Charles with Julian being none the wiser.

Also check back with CDL for daily “General Hospital” spoilers, gossip and more.