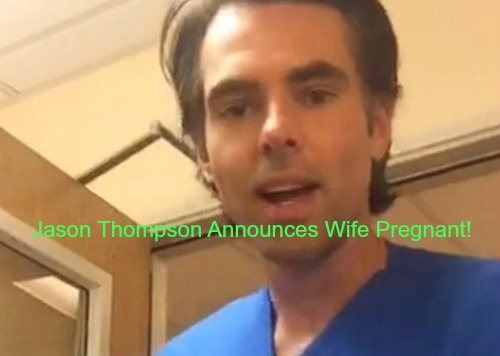 “General Hospital” (GH) spoilers tease that a certain fan favorite is going to be a proud papa soon. According to Chad Duell’s [Michael Corthinos] Periscope, Jason Thompson’s [Dr. Patrick Drake] wife, Paloma Jonas, is expecting their first child. When talking about the bouncing baby to his co-stars and wife, he was grinning ear-to-ear.

In the untitled Periscope, Jason Thompson hugs his wife; Paloma is expecting their first child. His co-stars told him he had better sleep now because when his baby arrives that sleep will be a thing of the past. The happy couple laughed as the fans and co-star gushed about the upcoming arrival.

The speculated arrival would be around May since in the background you can hear that she is passed the point of morning sickness- which places her around 14 weeks. Jason and his wife seemed extremely excited about their newest adventure – parenthood. He’s played a soap dad for so many years. It will be a refreshing change to experience parenthood and all its glory.

Jason will have plenty of help with his new offspring from his wife, Paloma to his co-stars that seemed genuinely interested and happy about the impending arrival of his child. Jason has had plenty of practice being a dad, being a soap dad for a long time.

The co-stars continued to call Jason ‘Daddy’ for the rest of the Periscope. Chad turned to Jason and asked him, “Are you sure you want your pregnancy announced now?” The video cuts out without Chad saying goodbye something highly out of the usual. Is it possible that Jason wasn’t aware that he was announcing his wife’s pregnancy to social media?

The most surprising part of the Periscope was not his announcement – although it was exciting; it was that Jason Thompson is still in his scrubs taping for “General Hospital.” Last week, it was leaked that Jason Thompson was NOT working anymore, and wouldn’t be seen past Christmas on the air.

Is it possible that was not correct, and Thompson will be staying longer than anticipated? It looks like fans will have to tune to the ABC soap opera to find out when his last air date is.

CDL would like to offer HUGE congratulations to Jason Thompson and his wife, Paloma on the announcement of their pregnancy; may she have a completely complication-free pregnancy delivering a healthy baby in the Spring. Don’t forget to come back later for juicy “General Hospital” spoilers and news!