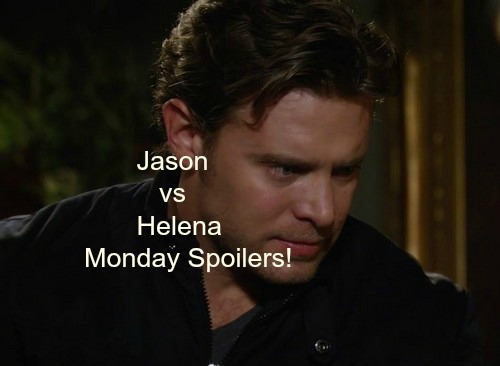 “General Hospital” (GH) spoilers for Monday, November 23 indicate that Jason Morgan (Billy Miller) is a long way from getting the answers he wants. Rumor has it that his inquisition of Helena Cassadine (Constance Towers) will hit a roadblock after she makes a stunning confession.

Is the old broad going to fake a coma or some other dramatics? Helena took credit for wiping Jason’s memory, but is she exaggerating? The bottom line is, she can’t fix it, but Robin Scorpio (Kimberly McCullough) may be able to. Plus a reveal about little Jake Spencer (James Nigbor).

Jason, Liz Webber (Rebecca Herbst) and Sam Morgan (Kelly Monaco) will be heading back to Port Charles soon for Thanksgiving. Sabrina Santiago (Teresa Castillo) and Michael Quartermaine (Chad Duell) have a lot to be thankful for – her pregnancy is progressing nicely, but now Sabrina thinks it’s time to come clean to Michael about why she has turned down his ongoing marriage proposals. Will she get out the news that the baby is really the offspring of Carlos Rivera (Jeffrey Vincent Parise) without interruption?

Will Michael hear this just as they’re sitting down to a turkey dinner with family so he has to process it on the spot? And will Michael handle the baby shocker and agree to raise baby Rivera as his own? After all, Sonny Corinthos (Maurice Benard) stepped up to raise him after his disreputable biological father made life hard on his mom Carly Corinthos (Laura Wright).

Is this history repeating itself and will Michael be the man Sonny raised him to be and keep loving Sabrina and her baby despite the biology? Or will he feel betrayed and lash out?

More history repeating itself is going on with Morgan Corinthos (Bryan Craig) who appears to be raging in a full-on bipolar meltdown. Morgan took Kiki Jerome (Hayley Erin) to the mountains to evade the law then broke into someone’s cabin and lied and said it was Sonny’s.

Now he’s determined to keep the cops from arresting Kiki for his mom’s hit and run accident and is hearing things and waving a gun around. Will Morgan injure himself or someone else with that gun? Shots are fired on Monday’s show!

Carly is terrified of what Morgan might do and hopefully Kiki will reach her and let her know where they are. Carly has to ride off and save the day but Sonny can’t go along because of his wheelchair. He hates this limitation and has to realize Carly will have to handle it without him, but he’s still frustrated.

Carly needs to get to the mountains, talk Morgan down and get Kiki to safety. Any chance that Morgan will fire off a shot at his mom thinking she’s the cops? Where’s Jason when Carly needs him?

Finally, another person dealing with psychological stress is Anna Devane (Finola Hughes). She has a session with Dr Andre Maddox (Anthony Montgomery) and he urges her to get to the root of her anxiety to get control of it. Problem is, Anna knows exactly the problem – it’s her cold-blooded killing of Carlos.

Anna needs to confess the crime to Dr Maddox for her own peace of mind, but first she needs to make sure she’s got a confidentiality guarantee and he can’t tell anyone about her crime.

All this and so much more on Monday’s GH – it’s a short week next week because of Thanksgiving. New shows will air Monday through Wednesday then nothing new until the Monday after. But we’ll be here every day with more gossip, news and spoilers all week long!  Check back with CDL over the weekend and every day for detailed daily “General Hospital” spoilers.