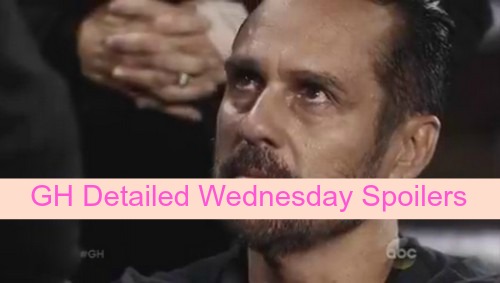 These “General Hospital” (GH) spoilers are for the Wednesday, November 11 show. Now that the custody case is settled and we all know Jake is Jason, it’s finally time for some action on some other storylines – woo hoo!

Sonny Corinthos (Maurice Benard) is fit to be tied now that Ava Jerome (Maura West) won the custody battle – that temper of his, what can you do? Of course, Sonny has decided to blame the verdict on Carly Corinthos’ (Laura Wright) absence and rat fink Ric Lansing (Rick Hearst) is happy to jump on that bandwagon since he hates Carly with a passion.

To try and give Sonny something else to focus on, Carly will meet up with Jason Morgan (Billy Miller) and beg him to come see Sonny to make the revelation.

Meanwhile, Dante Falconeri (Dominic Zamprogna) comes to see his dad to talk about his troubles now that he’s been dumped by Lulu Spencer (Emme Rylan) over the cheating. Sonny bemoans the custody loss which is his own stupid fault. Sonny tells him that he has to get Avery back.

No problem – “General Hospital” rumors indicate that Carly will feel guilty (even though it’s not really her fault) and will come up with a scheme soon to try and get Avery out of Ava’s hands.

When Carly brings Jason to see Sonny, the mobster will feel vindicated that he knew it was his former BF that saved him. But this reunion is not going to mean near as much to Jason as to Sonny – after all, Jason doesn’t remember him and does not like the mob or the associated violence.

Sonny will offer Jason his job back and get refuted. In a way, Sonny and Sam Morgan (Kelly Monaco) will be feeling the same vibe. They have all these feelings about Jason and he has nothing to offer them back. Frustrating!

Lulu meets up with her mom Laura Spencer (Genie Francis) and cries about Dante’s betrayal. Her mom will sympathize deeply and will encourage her to take her time and think things through and to not act while she’s hurt – but Lulu will not slow her angry roll.

“General Hospital” gossip indicates that Lulu may decide to have her baby without Dante – she’s supposed to see Dr Kelly Lee (Minae Noji) soon and may do something rash with the embryo she’s got chilling in storage.

Speaking of Lulu and Dante, Maxie Jones (Kirsten Storms) has some choice words for Dillon Quartermaine (Robert Palmer Watkins). Maxie will lay into him about showing the footage of Valerie Spencer (Brytni Sarpi) confessing to sleeping with Dante.

Maxie knows exactly why Dillon did it and chews him out for humiliating her BFF Lulu that way. Looks like the movie project may be done – or else Maxie could quit, but Dillon tells her she needs to keep pursuing her dreams because she has talent.

As we revealed in our “General Hospital” spoilers for the week ahead, Nina Clay (Michelle Stafford) is looking for a job that will show off her one skill – style. Nina wants to work for Julian Jerome’s (William deVry) newspaper as the fashion editor.

Alexis Davis (Nancy Lee Grahn) may scoff, but Julian will see the appeal and may give her a test run. Also we know Maxie will have a new job soon. Will she work as Nina’s assistant? We know that Nina digs Maxie’s style, so maybe…

Finally, Franco (Roger Howarth) Calls Dr Liesl Obrecht (Kathleen Gati) over to see him. He won’t be happy that she implicated Nina in Silas Clay’s (Michael Easton) murder, but she will remind him that she cares about him and will do anything to help him. Liesl will apologize and the two will make up.

On a side note, did Nathan West’s (Ryan Paevey) snarky comments make Franco feel like a moocher? Will Franco ask Liesl to let him come back as an art therapist? Will we see nutters Franco and Nina both gainfully employed soon? And what if Sonny is assigned to art therapy as part of his rehab? OMG!

So much happening on GH this week now that the pace has picked up after the snail-slow Jake reveal. Check back with CDL every day for detailed “General Hospital” spoilers plus other news, gossip and more!