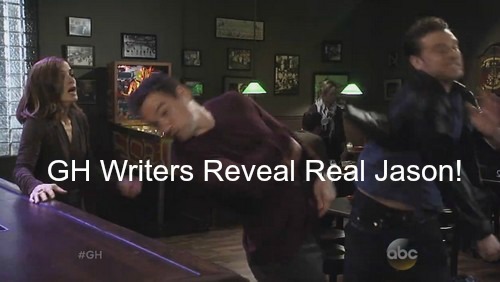 ‘General Hospital’ (GH) spoilers tease that Jason Morgan is in the midst of a bit of an identity crisis. ‘GH’ fans have been dying to know whether Jake Doe (Billy Miller) will take on the persona of Jason Morgan, or Morgan’s alter ego Jason Quartermaine.

It has been a bit disheartening for ‘General Hospital’ fans to have Jason Morgan back in Port Charles – however not have him acting like the once beloved character. Headwriters Jean Passanante and Shelly Altman recently sat down with ABC Soaps In Depth to discuss Jason Morgan (or Quartermaine’s) personality dilemma.

ABC Soaps In Depth asked the writers what route they planned on taking with Jason, would he be a Morgan or a Quartermaine? Jean Passanante explained, “That’s a good question and a complicated one. We have to remember that he was Jason Quartermaine before he was Jason Morgan. His personality was altered as a result of the earlier accident, and there’s a possibility that some of the character; some of those traits have been reignited.”

Shelly Altman stressed that this storyline is nothing like Luke Spencer’s dissociative identity disorder, it’s much more than that. She explained that Jason has basically lived his life as three different people – Jason Morgan, Jason Quartermaine, and Jake Doe, and now he is struggling to integrate all three of those personas in to one.

So, to answer fan’s questions – it sounds like we aren’t getting Jason Morgan, Jake Doe or Jason Quartermaine, we are getting a combination of all three.

Altman and Passanante also discussed another important aspect of the Jason Morgan saga – Liz Webber (Rebecca Herbst). Liz is certainly the most hated character on ‘General Hospital’ and possibly all soaps today because she kept Jason’s identity a secret from him in hopes of not losing him to his wife Sam.

It seems impossible, even wrong, to redeem Liz – but the ‘General Hospital’ writers remain optimistic. Altman dished, “She is already in love with this man when the information came to her about his true identity. The beauty of a soap is the transgression is redeemable. It is an extremely complicated situation.”

While dishing ‘General Hospital’ spoilers, Altman and Passanante also explained their decision to bring back Carlos Rivera (Jeffrey Vincent Parise), and how it will affect Anna (Finola Hughes) and Sabrina (Theresa Castillo).

The writers really wanted to “spice up” Sabrina’s pregnancy – adding another baby-daddy to the mix was a surefire way to do so. And, it made Anna Devane’s current storyline much more interesting as well.

Shelly Altman added, “Ultimately, even though Carlos is alive, Anna as a member of law enforcement must live with the fact that she pulled the trigger four times in an attempt to kill Carlos.”

So “General Hospital’ fans, what do you think of the Jason Morgan personality dilemma? Will he be able to combine all three personas? Who will he turn out to be?

Is Liz Webber really redeemable – can she be worthy of redemption? How do you feel about Carlos returning? Share your thoughts and theories in the comments below and don’t forget to check CDL tomorrow for more ‘General Hospital’ spoilers, news, and updates.