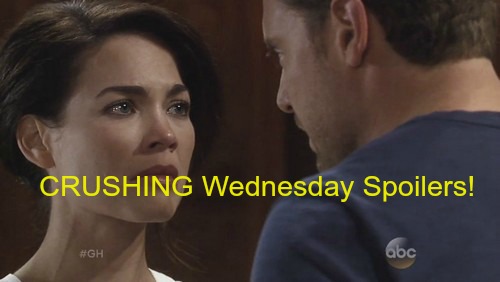 Little Jake Spencer (James Nigbor) comes looking for a goodnight hug from his dad but Liz realizes Jason has left the house and she has no idea where he’s gone. Liz is in panic mode – which is right where she should be!

At first, Jason will not want to hear the truth Sam is telling him and, of course, Sam has no evidence to prove the veracity of her accusations. But that won’t stop Sam since she finally has Jason’s ear away from Liz. Sam will lay out everything.

Look for Sam to also accuse Liz of scheming with Nikolas Cassadine (Tyler Christopher) since she knows Jason loathes the Cassadine heir. Jason will leave hoping Sam is lying, but knowing that she’s probably telling the truth, despite her motives.

We can expect a last minute confrontation between Jason and Liz as the show closes where he tells her what Sam said and asks if it’s true. Liz will finally crumble, but it’s doubtful we’ll hear a confession until the December 10 episode.

Sam may feel smug about wrecking Liz and Jason’s relationship but she’s about to get hit by karma and experience a breakup herself. Patrick Drake (Jason Thompson) is furious at Sam over her inability to stop meddling in Jason and Liz’s relationship.

Patrick will get advice from someone in Port Charles who 100% understands what he’s going through – Sabrina Santiago (Teresa Castillo). She’ll hear Patrick’s concerns then ask him if he really wants to be with Sam or not.

The bottom line seems to be – Patrick may love Sam but has to acknowledge that she has been emotionally unfaithful to him and is still obsessed with Jason (and Liz). Patrick has to shield his heart and protect Emma Drake (Brooklyn Rae Silzer).

Sabrina has her own problems brewing – Michael Quartermaine (Chad Duell) has questions about her pregnancy. Michael comes to GH, finds Felix DuBois (Marc Samuel), and quizzes him about some concerns he has.

Michael likely won’t arrive at GH with suspicions, but will leave with many. Look for Felix to hedge and sidestep to avoid telling outright lies about the pregnancy. Felix will want to protect Sabrina, but can’t put his career at risk to do so.

This will raise questions for Michael about how far along she is and why Sabrina is being so cagey about the pregnancy. Look for Michael to be sneaky in coming days to look for the answers he needs to confirm or allay his suspicions.

Looks like Dillon Quartermaine (Robert Palmer Watkins) is sticking around Port Charles with that new Crimson gig he scored so he’ll go see Lulu Spencer (Emme Rylan) to try and make amends for the public humiliation.

Will Dillon see Johnny Zacchara (Brandon Barash) at the Haunted Star? Will Dillon think Johnny and Lulu are romantic? GH spoilers indicate that Dillon will see something that makes him misinterpret things between Johnny and Lulu. Also, expect more Crimson goings on soon!

Will Lulu soften towards Dillon now that most of her anger seems to be focused on Valerie Spencer (Brytni Sarpi)? And will we see Lulu hooking up with Dillon or Johnny (more likely Dillon) as a revenge romance?

Unaware that Lulu is talking to Johnny about offing her, Valerie is out on a date with Dante Falconeri (Domini Zamprogna). Val and Dante just agreed that from here on out, they need to keep their new relationship on the down low for a while, but it may be too late.

Olivia Falconeri (Lisa LoCicero) runs into Dante at Kelly’s – how long before she notices he’s at a table for two? Olivia will tear into Dante for continuing to see Valerie. Olivia sees her as a home-wrecking tramp and is 100% on Team Lulu.

Valerie will lurk nearby – looks like she will be away from the table when Olivia shows up. Will Valerie hear Dante stand up for her or hear something that will upset her? Dante can be as stubborn as his dad, so expect him to tell his mom to butt out.

Don’t miss a moment of this week’s action and check back with CDL for detailed daily “General Hospital” spoilers.

Unexpected surprises are in store for today’s #GH. Don’t miss out on them!