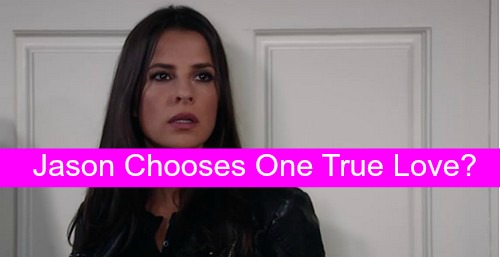 “General Hospital” (GH) spoilers reveal that December 8, 2015 is the day when Jason Morgan (Billy Miller) will hear from Sam Morgan (Kelly Monaco) that she believes Liz Webber (Rebecca Herbst) has been lying to him for months.

While Sam has absolutely no hard evidence, we can expect her to act as if she does and be thoroughly convincing in her talk with Jason. Then, on the Wednesday, November 9th episode, Liz’s day of reckoning will arrive!

Jason confronts Liz with what Sam told him. Liz could always try to press on with her subterfuge but, instead, she will crumble, come clean and throw herself on Jason’s mercy. Too bad Jason won’t be feeling very merciful.

Jason will be furious with Liz. She was his tether to this new life and when he finds out that link was made of deceit, he will be floored. Many fans assume (and are hoping) that Liz’s betrayal revelation will send Jason scurrying him back to Sam.

But don’t count Liz out – and don’t count out co-writers Jean Passanante and Shelly Altman for doing something that no one could predict. The Liz-Jason-Sam rivalry has been going on for so long and there will be no final resolution this week.

Jason will turn to Sonny Corinthos (Maurice Benard) in the aftermath, but what then? Will Jason choose Liz or Sam? Or will he do something that none of the women in his life will see coming? We know Jason is out of Port Charles soon due to Billy Miller’s vacation.

Will Jason leave town without giving Sam, Liz or the fans any closure on his relationship status? And who should Jason be with? Who is Jason’s true love? Is it Sam? Is it Liz? Is it someone Jason has yet to meet?

Is Sam Jason’s true love?
Sure Sam was the last woman Jason was with before he “died” but does that means she deserves to win him in the end? They have a child together, that’s true, and she has been at his side during some pretty rough times.

Plus, Sam has never wanted Jason to be anything more or less than he has been. But is that a good thing? Sam was a former con artist who still has no qualms about engaging in illegal and shady activities herself.

Let’s face it, Sam is not a positive influence and Jason won’t ever be a better man with her. That makes Sam an easy choice, though. But is the easy choice the best one – and there’s still the fact that Jason doesn’t remember her and loves Liz.

Is Liz Jason’s true love?
On the flip side, Jason has always wanted to be a better man for Liz. Sam sees this as a negative, as Liz trying to mold Jason into someone she wants him to be. But could it just be that Liz wants Jason to be the best version of himself?

That doesn’t mean she doesn’t love Jason for the person as he is, but she sees his potential. Liz and Jason also have a child together that bonds them, so she’s on equal footing with Sam there. And Liz has known Jason longer.

Liz is not the goody-goody that Sam makes her out to be and could be an able partner for new Jason. Liz also has the love of new Jason on her side and he’s very passionate in his affectionate for her – that will be hard for him to move past.

Is Jason’s true love yet to be discovered?
The new writers may throw the old Jason-Liz and Jason-Sam storylines out altogether. It’s important to consider that part of Liz and Sam’s attraction to Jason is the rivalry itself. Is fighting to keep the other woman out of Jason’s life part of the attraction?

These two see Jason as a prize to fight over – that’s not healthy. If there was no rival to win him from, would either relationship have lasted? Perhaps Jason needs to get away from both Sam and Liz and figure out who he is without either of them in his life.

Could the showrunners bring Jason back to town after his holiday break committed to being a good father to Jake and Danny, but not with Sam and Liz’s baby mama drama? Will Jason be so sick of them pulling at him that he walks away from both women?

What do you think GH fans? Do you want to see Jason with Liz, Sam or making a new life for himself with a shot at a different love? Share your thoughts in the comments below and check back with CDL for daily “General Hospital” spoilers and more!