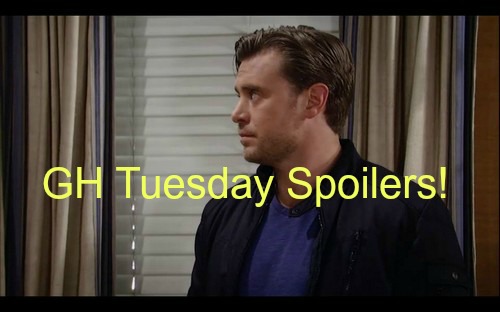 Jason wants to know what the hell is going on and Sam starts again with her accusations (which are all true, but that she cannot prove). Jason snaps. Carly Corinthos (Laura Wright) set him off by trash talking Liz and Jason came home mad.

He takes it all out on Sam and screams at her to stop it, shut up, and get out of his house. Sam is stunned – even Liz is taken off guard, but will be smug that he stood up for her. This recalls the time Jason threatened to kill Sam – he’s that mad.

Sam leaves, but then Liz’s actions don’t add up to Jason, and he can’t shake the feeling something is off. Carly told him to trust his gut, so he decides to do just that. He chases Sam down and she’ll be thrilled to share all of her theories with Jason.

Sam can’t back them up, but it’s still food for thought for Jason. Will he get any memory flashes from this encounter or is he stuck in the now trying to figure things out? Liz is not out of the woods yet, but probably thinks she is. Uh-oh…

Back at Patrick Drake’s (Jason Thompson), Emma Drake (Brooklyn Rae Silzer) is ready to make wedding plans for her dad and Sam – but then she becomes worried she’s losing Sam too. Patrick lets Emma call her mom but that only stresses Emma out more.

And Sam’s not the only lady in town itching for revenge against a rival. Lulu Spencer (Emma Rylan) is steamed about Valerie Spencer (Brytni Sarpi) and Maxie Jones (Kirsten Storms) tries to talk her down. Lulu can’t be reasoned with, what’s next?

Johnny Zacchara (Brandon Barash) blows back into town and he’s 100% ready to help Lulu get back at her husband-stealing cousin so long as Lulu is willing to help him. Also, will Lulu do what Maxie stopped her from doing before?

Looks like Lulu may still go blab to Dante’s boss Jordan Ashford (Vinessa Antoine) about Dante cheating even though Nathan West (Ryan Paevey) warned Lulu she was going to get Dante fired. Lulu may be past the point of caring and just wants to punish all parties.

Valerie is excited about her first official date with Dante and lurks around Kelly’s waiting on him to show up. Bobbie Spencer (Jacklyn Zeman) shows up instead and Val says she has a date – she’ll have to tell Aunt Bobbie it’s with Lulu’s hubby.

How will Bobbie take this? She’ll likely preach caution but Valerie is on cloud nine and can’t be stopped. Nathan confronts Dante about taking on a rebound relationship with Val and says it can ruin any chance he has to get back with Lulu. Dante is undeterred.

Hayden Barnes (Rebecca Budig) is close to knowing Nikolas Cassadine (Tyler Christopher) ordered her murder, but time has run out. Hayden has been teasing and frustrating Nikolas for too long and he’s about to burst. He tells her he knows what she’s doing.

In truth, Nik has no idea. Hayden placates him by sharing what’s probably a hard luck story from her past before she came to Port Charles. Will Nik buy what she’s selling or will Hayden have to bed him to douse his suspicions?

Watch the Tuesday, December 8 GH then come back to CDL for more “General Hospital” spoilers for the days ahead including what will happen once Jason knows the ugly truth!