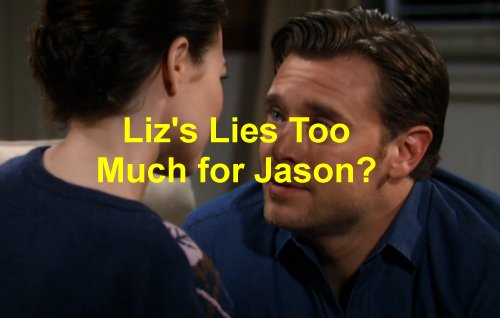 “General Hospital” (GH) spoilers reveal that Monday is the Sam Morgan (Kelly Monaco) versus Liz Webber (Rebecca Herbst) showdown. But it won’t be until Wednesday that Jason Morgan (Billy Miller) confronts Liz about her months of lying.

But here’s the thing, Sam is just as big a liar as Liz in many ways, so will Jason realize that and take that into account? Can Liz yet walk away with her guy? No doubt an angry Jason won’t allow Liz to rattle off a laundry list of Sam’s misdeeds.

Jason will be too mad to listen. He will want to know strictly about the specific lie Liz has been telling about not knowing his identity and whether or not she was conspiring with Nikolas Cassadine (Tyler Christopher). Of course, she was.

And it’s not just the lie – it’s how Liz knew he was desperately searching for answers. Liz saw how badly he wanted to know who he was and she kept on lying. Jason may see this as Liz standing by and let him run frantic when she could have helped.

What is 100% true is that Liz loves Jason – if actions speak louder than words, she has demonstrated over the last year that she loves him enough to do anything. But is it a healthy love? Is it a love that Jason wants after all of this?

On the flip side, Sam’s love of Jason may also not be what he needs. She’s done some horrible things and told some terrible lies anytime Jason was with Liz to try and break them up. Clearly, Jason of old and Jason of now are torn between Sam and Liz.

What happens if Jason walks out on Liz and goes to Sam but still feels nothing for her? What if Jason kisses her and it pales in comparison to the passion Jason has with Liz? Sam has, once again, gone to extremes when dealing with Liz.

And it will certainly work in the moment, but will it work in the long term? After Jason is crushed by the news that Liz has been lying to him, he will turn to Sonny Corinthos (Maurice Benard). But Sonny may not push Jason towards Sam.

Sonny likes Liz and Sam both, so he may not recommend either. It’s more likely that Sonny will tell Jason to give himself some time and follow his heart. Sonny may even recommend Jason step back from both while he considers what to do.

Overall, the scales of dishonesty and shady doings are pretty well matched between Sam and Liz. Sam has behaved so badly towards Liz and her kids that, at one point, Jason even threatened to kill Sam. Clearly Sam doesn’t have the moral high ground.

So what do you think GH fans? Will Jason follow his heart back to Liz? Or will Liz’s lies be too much for him to take? And will Sam be able to reignite any passion or romance with Jason when his heart still clearly belongs to Liz?

Share your thoughts in the comments below and check back with CDL often for more “General Hospital” spoilers, gossip and more.