General Hospital (GH) Spoilers: Sam Bluffing, Has No Evidence of Liz’s Lies – Who Will Jason Believe? 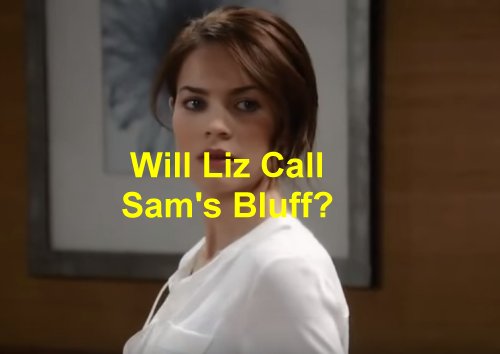 “General Hospital” (GH) spoilers reveal that Sam Morgan (Kelly Monaco) will be up to her old lying ways on the Monday, November 7 episode. Sam is an old hand at running cons and her biggest one yet is aimed at Liz Webber (Rebecca Herbst).

Sam shows up to confront Liz (see video below) and says she knows that Liz has been lying to Jason Morgan (Billy Miller) for almost a year about his identity. But the big kicker is, Sam knows nothing! She’s just speculating – nothing more.

Sam hopes to shock Liz into a confession by her bold bluff. Will it work? Sam lays the groundwork for this lie by telling Liz that little Jake Spencer (James Nigbor) told Danny Morgan that she and Laura Spencer (Genie Francis) are keeping a secret from Jason.

Liz tries to side track Sam by accusing her of interrogating her son but Sam won’t discuss that – she can’t let Liz know she got nothing out of little Jake. Instead, Sam brings it back around and calls Liz a “selfish bitch.”

Then Sam says, “Laura confirmed it.” Liz says she’s lying but Sam counters back “Am I?” Liz just heard straight from the horse’s mouth (aka Laura) that she did not confirm doodly to Sam. Laura made the excuse that Jake has an “active imagination.”

What’s really interesting is this is not 100% about Jason anymore. On Friday, Sam told her mother Alexis Davis (Nancy Lee Grahn) that she can’t stand the idea that Liz will get away with what she’s done. But Sam doesn’t have clean hands herself.

Sam hired goons to threaten Sam and her sons when Jason was seeing Liz. And Sam watched Jake be kidnapped and kept quiet. That’s just awful. Sam was willing to let Liz’s sons be in physical danger because she was angry that Jason was with her.

That’s kind of how Sam is acting now. Sam, at this point, doesn’t assume she has a shot with Jason since he doesn’t remember their relationship and doesn’t have feelings for her. Sam is still hoping to cling to Patrick Drake (Jason Thompson).

But what Sam wants now is for Liz to be punished – that’s what many GH fans seems to want as well. Sam isn’t even scheming to get Jason back, she’s just fibbing to try and blow Liz’s life up – and Sam is willing to hurt Jason to make it happen.

Sam is just angry and lashing out – and she doesn’t care about the collateral damage. So what do you think GH fans, is Sam wrong to try and trick Liz into a confession with her lies? Do you think Sam is more focused on punishing Liz or getting Jason back?

On Monday’s show, we’ll see Jason break up the cat fight and take Liz’s side without hearing Sam out. But that’s not nearly the end of it. “General Hospital” spoilers do tease that fans (and Jason) will have a 100% reveal by Wednesday.

Jason will know that Liz has been lying along with Nikolas Cassadine (Tyler Christopher) and Laura. But where Jason goes from there is still wide open. Will he forgive Liz? Turn to Sam? Turn away from them both? We can’t wait to see.

Check back with CDL often for more “General Hospital” spoilers, gossip and more.