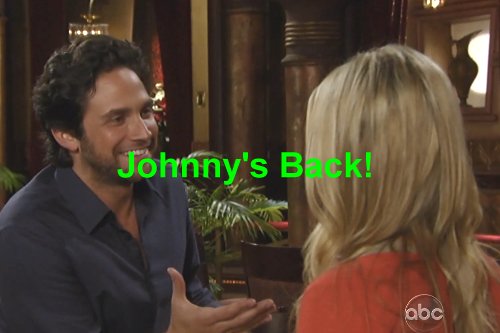 “General Hospital” (GH) spoilers hint that Johnny Zacchara (Brandon Barash) is back in Port Charles next week and ready to stir up trouble courtesy of Lulu Spencer (Emme Rylan). But isn’t Johnny wanted by the cops? Is he still on the run from the law?

Last we saw Johnny, he was recovering from a gunshot wound thanks to Julian Jerome (William deVry), hid out at Sabrina Santiago’s (Teresa Castillo) place then borrowed Maxie Jones’ (Kirsten Storms) car and left town, all while on the run from the cops.

The good news is, Johnny seems to have put his legal troubles behind him and is back in Port Charles legitimately and won’t have to hide from the PCPD. That’s great news for his Haunted Star partner Lulu who needs a partner for personal reasons too.

Lulu will catch Johnny up on all the garbage going on in her life and the breakup of her once-idyllic marriage to Dante Falconeri (Dominic Zamprogna). Lulu also tells him all about her husband-stealing cousin Valerie Spencer (Brytni Sarpi).

Johnny needs help from Lulu – and she agrees to assist him if he’ll play along with her on a scheme to take down her hated cousin Val. What do these two schemers have in mind? If Lulu wants to set Dante off, acting like she’s rebounding with Johnny should work.

But it doesn’t look like Lulu and Johnny will be truly involved – at least not at first. For now, they’re just working on revenge, not romance. But according to “General Hospital” spoilers, Dillon Quartermaine (Robert Palmer Watkins) will misread what’s going on.

Dillon wants to be with Lulu and they almost hooked up when she was furious with Dante, but then she backed off and shut it down. Dillon will be angry when he’s convinced that Lulu passed him over and decided to rebound with Johnny instead.

Could Lulu’s confession to Dillon that she and Johnny are not intimate move her forward with Dillon? Will Dillon yet get the girl of his dreams? And does Johnny and Lulu’s plan go deeper than making Dante jealous? Will they target Valerie personally?

Dante doesn’t like Johnny for a whole host of reasons – some related to his law breaking activities and others based on personal issues with the way Johnny has interacted with the Corinthos clan. In that respect, Johnny is a perfect partner for Lulu to enrage Dante.

We also have to wonder if Johnny is in Port Charles as part of Paul Hornsby’s (Richard Burgi) mob plot – or if he could become a thorn in Paul’s side if he’s not part of his plan. No doubt, we’ll see the two mob men interact at some point – watch for fireworks!

With Johnny back in town, will Carlos Rivera (Jeffrey Vincent Parise) pay him a visit to share his baby mama drama with Sabrina? And will Johnny stay on the Haunted Star with Lulu? He does still own half the floating nightclub, so why not?

Sparks will fly when Johnny comes back to town – be sure to check with CDL often for more on this storyline and other “General Hospital” spoilers and gossip.