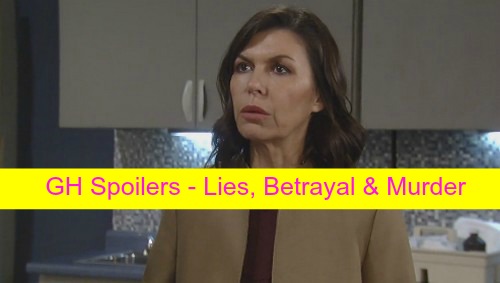 Lies, betrayal and murder in Port Charles on cliffhanger Friday – these “General Hospital” spoilers will get you pumped for the October 16 show. Betrayal first. Hayden Barnes (Rebecca Budig) just found out that her amnesia is essentially psychosomatic but Liz Webber (Rebecca Herbst) isn’t buying it. She blocks Hayden in the exam room and demands that she tell her what she knows about Jake Doe (Billy Miller). If Hayden didn’t already know there was something going on about Jake, now she does.

Hayden knows exactly who Jake is thanks to her eavesdropping but will not respond well to Liz trying to intimidate her. Liz won’t be comforted by this conversation at all. Nikolas Cassadine (Tyler Christopher), unlike Liz, hopes that Hayden’s amnesia is both genuine and permanent since he likes this scheme-free version of Hayden. Of course, Nikolas doesn’t know that Hayden is on to him and is already scheming.

Nikolas offers Hayden a job, but what is it? Will he ensconce her as his assistant at ELQ? Or will he ask her to be Spencer Cassadine’s (Nicolas Bechtel) nanny? What job won’t insult her and will allow him to control her without making it obvious that’s what he’s doing? Hayden will likely take the job, so long as it doesn’t interfere with her revenge plans for getting back at Nik for trying to kill her.

Related to the lies about Jake’s identity, Damien Spinelli (Bradford Anderson) cracked the code but it looks like they may not have stolen the exact info they needed to figure out who Jake is, but will likely discover some other evil things that Nikolas is up to. Sam Morgan (Kelly Monaco) tells Damien they have to do this and he reveals some of Nik’s dirty laundry to them.

Too bad among the pilfered files is not Jake’s real name – and why would it be? It’s not like Nikolas needed to make a note that said “Jake is Jason Morgan.” Jake will not get the answers he wants that easily and will have to go and literally shake them out of Nikolas – but that comes next week, not Friday. But what will they found out about Nikolas’ dirty dealings?

Sabrina Santiago’s (Teresa Castillo) pregnancy secret is obvious to Tracy Quartermaine (Jane Elliot) who busts her out on it and now Sabrina has to convince Tracy not to blab the news to Michael Quartermaine (Chad Duell). What excuse can Sabrina give to Tracy to keep her quiet? Can she plead that Michael has too much stress on him with Sonny Corinthos (Maurice Benard) being in the hospital?

Also weighing on Michael is a police interview about Carlos Rivera’s (Jeffrey Vincent Parise) murder. Commish Jordan Ashford (Vinessa Antoine) wants to know what Mikey knows about the shooting. Has the PCPD not figured out time of death yet? Could the cops think that Carlos shot Sonny then Michael had Carlos shot in revenge? What’s the timing the cops assume for the crime? That’s important.

Paul Hornsby (Richard Burgi) listens in this interview, but his real focus was an earlier conversation he had on the docks with Anna Devane (Finola Hughes). Paul called her down and raked Anna over the coals about Carlos’ murder. Since he knows Anna shot Carlos, Paul knows exactly the questions to ask to push her buttons and put her on edge so Anna will play right into his plans for her.

A terrified Anna runs to GH to beg Patrick Drake (Jason Thompson) to write her a prescription for sleeping pills. Seems like the stress of trying to avoid arrest for the murder she committed is wearing on Anna. She’s also getting texts from Kyle Sloane (Robb Derringer) which are actually from Paul who has Sloane’s phone. All of this is designed to maneuver Anna into a frantic state. Will it work? Looks like it.

So much happening on some major storylines on Friday – don’t miss this critical episode then check back with CDL for more “General Hospital” spoilers including a look at what’s happening on next week’s show in our ‘week at a glance’ spoiler and detailed daily spoilers all week long.