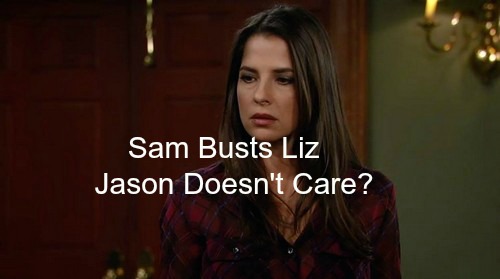 “General Hospital” (GH) spoilers tease that Sam Morgan (Kelly Monaco) is focused on taking down Liz Webber (Rebecca Herbst) and winning back Jason Morgan (Billy Miller) at all costs – even though she claims she’s over Jason.

But could Sam’s antics cost her Jason instead? Let’s consider. First off, Liz is lying to the man she loves – Jason – but it’s because she so desperately wants to be with him. Sam, though, is lying to Patrick Drake (Jason Thompson) and not for a good reason.

Sam is stringing Patrick along while working hard to put herself into a situation where she can dump him and get Jason back. And Sam knows that Emma Drake (Brooklyn Rae Silzer) will be brokenhearted is she keeps this up, but Sam won’t stop.

Plus, Sam is about to engage in some really aggressive tactics to try and get her man back. First, Sam is going to play nice with Liz and invite little Jake Spencer (James Nigbor) over for a playdate with Danny. But then inquisition starts.

Sam is trying to dig up dirt on Liz by interrogating a psychologically fragile child. What will Jason think about Sam manipulating both of his sons this way? Odds are, he will not like this and will see it as an abusive tactic.

Next, Sam will turn to Laura Spencer (Genie Francis) to find out more about the secret she shares with Liz. Laura will not want to outright lie to Sam, but also won’t want to outright betray Liz’s secret. But it’s enough for Sam to confront Liz.

Sam goes full on and accuses Liz of lying and manipulating Jason. Will Liz finally crack and confess her secret or hang on until the bitter end. The bottom line is, Sam cannot have any hard evidence – none exists (or does it?).

If Sam is clever enough to chat up Hayden Barnes (Rebecca Budig), that minx may have recorded the schemers discussing the Jason secret. But, if not, all Sam has are the statements of a traumatized child and a concerned grandma.

That’s hearsay at best. But Sam is grasping at straws and that’s enough for her to corner Liz and make major accusations. But even if she can get Liz to confess that doesn’t mean she will win Jason back. And this may surprise Sam.

After her showdown with Liz, we can likely expect Sam to go to Jason with her “proof” of Liz’s lies. But will Jason focus not on the lie Liz told but the depths to which Sam stooped to dig into this secret? Jason will not like what Sam has done.

Sam may explain about the playdate, but Jason could see that as her manipulating his son who is so already obviously troubled. Plus, Sam is acting on the assumption of old affection that Jason no longer feel for her and this will blow up in her face.

Jason won’t like that Sam is getting aggressive with the woman he loves – Liz – and his son Jake. To Jason, Sam is just a friend and nothing more and with her trying to pull the only life he has down around his ears, Jason could turn on Sam for good.

Will Sam end up losing both Patrick and Jason over her upcoming antics? Stay tuned to CDL for more “General Hospital” spoilers, gossip and more every day!