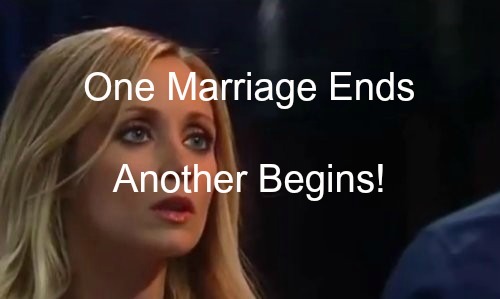 “General Hospital” (GH) spoilers indicate that major life changes are coming that could end one marriage but spark another. Here’s what you need to know about romance and relationships for Patrick, Robin, Dante, Lulu and Johnny.

Patrick Drake (Jason Thompson) was circumspect when he talked to Sam Morgan (Kelly Monaco) about his future with Robin Scorpio (Kimberly McCullough). He admitted love, but not what’s next for them. Is Patrick too scared to make a big move with his former wife?

Patrick had better get over it fast because Maxie Jones (Kirsten Storms) won’t let him do any less. Maxie shows up at his house and tells him to get moving and reunite with his baby mama ASAP. Looks like Patrick needed a little prodding to kick start him.

Does Patrick still have the ring he gave Robin before? Hopefully he won’t recycle the ring he gave to Sam… Looks like Patrick will take Maxie’s advice. GH spoilers tease there will be a proposal for New Year’s and a surprise wedding soon after. Is this a new marriage for Scrubs?

Sonny Corinthos (Maurice Benard) and Dante Falconeri (Dominic Zamprogna) will talk about the state of his son’s wrecked marriage. Dante feels like he has no choice but to go with the separation that Lulu Spencer (Emme Rylan) wants but Sonny says Dante is copping out – no pun intended.

Sonny tells Dante to fight for his marriage, not give up on Lulu, and to quit being stupid. Sonny tries to get Dante to open up but he makes excuses and walks off. The two are at GH and it looks like Dante is there to talk to Nikolas Cassadine (Tyler Christopher) about his injuries from the attack.

Also thinking about Lulu is Johnny Zacchara (Brandon Barash). Johnny is already thinking beyond the revenge scheme he’s working with Lulu. Johnny wants a future with her, but hasn’t told her yet. Instead, Johnny tries to get clues out of Lulu about whether her marriage is really done.

Johnny asks Lulu if she’s truly done with Dante. Johnny is gearing up to put it all on the line and make a big move on New Year’s Eve. Johnny will kiss Lulu and reveal his feelings to her. Johnny wants her back and is hoping she’ll move on from Dante and be with him.

Johnny may get a shot at Lulu once Dante finds out Lulu is plotting with Johnny and planning to take down Valerie Spencer (Brytni Sarpi). Dante may be so angry that he breaks it off with Lulu for good which would thrill Johnny.

Don’t miss a moment of the action this week on GH and check back with CDL often for more “General Hospital” spoilers and news.