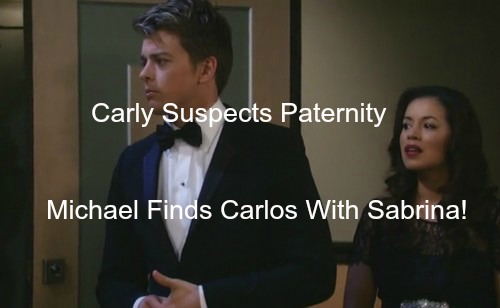 At the Holiday Gala, Monica Quartermaine (Leslie Charleson) will tell Michael that Sabrina’s baby is very healthy – and coming very soon – based on the sonogram he shows her. But Michael can count to nine months and so he goes off to find Sabrina.

Little does he know, she’s hiding away in a private room with Carlos Rivera (Jeffrey Vincent Parise) who’s dressed as Santa Claus. Michael will interrupt but will not recognize Carlos and gives him some cash to get him to go away assuming he’s a MetroCourt flunky.

Then Michael will ask Sabrina if he’s the father of her baby. When he asks, he’s clear to say “your baby” not “our baby” because he already knows. But will Michael be able to get an answer from Sabrina before Carly bursts in and makes a scene?

We all know that Carly’s main thrill in life is angry confrontations with those she feels have slighted her loved ones. In this case, though, Carly is spot-on that Sabrina is hurting Michael with her lies, even though Carly herself tried a very similar scheme in the past.

Carly doesn’t want Sabrina with Michael. You’ll recall that Carly told Sonny Corinthos (Maurice Benard), back when he was recovering from his gunshot wound at GH, that Michael doesn’t love Sabrina in a way that makes them a happily ever after couple.

Carly was hoping that Sabrina and Michael would burn out soon but then the pregnancy announcement tethered Michael to Sabrina and Carly has been annoyed ever since. When Monica tells Carly that Sabrina’s baby is about to pop, Carly will spring into action.

Carly can also do the math on how long Michael has been with Sabrina and knows the baby is not his. Carly will go looking for Michael only to find out he’s with Sabrina. Carly will likely burst into the room to hurl accusations at Sabrina.

But will Michael have already gotten Sabrina to admit her baby’s paternity by then? Or will Sabrina still be trying to put off the inevitable? Also, even when Sabrina admits that Michael is not the baby daddy, she will not want to tell Carly and Michael that her baby daddy is Carlos.

Even though Carlos told Sabrina he didn’t shoot Sonny, neither Carly nor Michael will believe that. Will Sabrina name the baby daddy or just say that she got drunk and had a one-nighter? Carlos being the father’s baby is worse than if she just picked up a random dude for sex.

On the plus side, Michael and Carly both believe that Carlos is dead, but that fib won’t hold up much longer with Anna Devane (Finola Hughes) digging into the truth. And with Sabrina this close to delivery, will the confrontations and stress put her into labor?

At the Nurse’s Ball, Olivia Falconeri (Lisa LoCicero) went into labor early. Will this event also have a birth attached to it? And will seeing Sabrina in labor commit Michael to standing by her side? This whole deal may not work out like Carly wants at all.

Carly wants Sabrina and the baby out of Mikey’s life. But if Carly comes too hard at Sabrina – which she will because, you know, it’s Carly – Michael may step in to protect Sabrina from his mother’s wrath. Plus, Carly has told lies about baby paternity to try and protect her children.

Carly has zero room to accuse Sabrina of wrong-doing here when Carly has done worse when Michael was a baby. Remember Carly stole her mom’s husband Tony and then got knocked up by AJ in a one-night stand.

Then Carly tried to convince Tony that he was the baby daddy, then lied and said it was Jason’s child. Carly never planned to tell AJ at all, but it was Robin Scorpio (Kimberly McCullough) that finally blabbed the truth to AJ.

Even then, Carly kept up her shenanigans and eventually pushed hard enough that she was able to have Sonny adopt Michael and cut AJ out of his life which ruined AJ’s life and, ultimately, may have also led to his death.

However, Carly’s murky baby history will not slow her roll at all. But Michael may step up, just like Sonny did, and be a father to another man’s child. This would be made easier by the assumption that Carlos is dead.

Michael raising Carlos’ child is a nifty sort of parallel back to Sonny raising AJ’s. Will Carly see the similarity and see the love Michael has for Sabrina? Or will she refuse to back down and drive a wedge into her relationship with Michael?

Share your thoughts and comments below and come back to CDL often for more “General Hospital” spoilers and news.