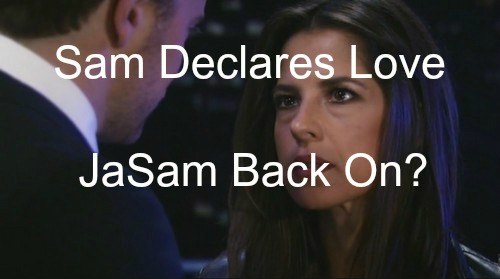 “General Hospital” (GH) spoilers indicate that Sam Morgan (Kelly Monaco) and Jason Morgan (Billy Miller) will share an intimate moment on the Monday, December 21 episode. Liz Webber (Rebecca Herbst) is drinking away her woes but notices both have left the Gala.

Liz assumes the worst – and that’s not a bad idea since Jason comes up on Sam on the MetroCourt balcony. Jason will offer a heartfelt apology to Sam for calling her a liar even after he knew she was his wife and the mother of his child.

Sam accepts his apology then Jason notices there’s no engagement ring on her finger. Sam will tell him she and Patrick Drake (Jason Thompson) mutually decided to break it off. On a side note, that’s a nice way to say it, but Patrick clearly dumped her over Jason.

Sam decides to roll the dice and confess to Jason that she still loves him. She tells him she loved Patrick (past tense) but not the way she loves him (present tense). This will happen at the end of the show leading to a cliffhanger moment for the Tuesday, December 22 show.

Will Jason act on this knowledge – or will Sam? Will we see a romantic mutual kiss? The last time Sam tries to put the make on Jason, he kissed her for a moment then pushed her back because he was with Liz. But now Jason has clearly split with Liz.

Will he be all in for the kiss? Or is Jason too confused to entertain the notion of reconciling with Sam just yet? The important thing is, after Sam declares her love – maybe not a minute or even an hour later, but soon – Jason will have some memories of life with Sam return.

And, more importantly, these are not just visuals of them together like he had before of them on the motorcycle. These will be moments, perhaps of their honeymoon, and Jason will have a strong emotional response to the memories.

Jason will not only begin to get his memories of Sam back, but his feelings as well. Nathan Varni offered up some GH spoilers on a recent podcast, The Kroll Show, and said that he’s pretty sure all of Jason’s memories will come back at some point in 2016.

Varni also says that Jason will soon see Sam “in a new light.” He added that Sam is not the same person she was when Jason was last with her because she’s grown a lot due to her relationships with Silas Clay (Michael Easton) and Patrick.

GH fans may get their JaSam reunion sooner than hoped. While there are still many “General Hospital” spoilers that indicate Jason will give Liz another go, it looks like any restart of Liason will be marred by Jason’s returning memories of, and feelings for, Sam.

What do you think GH fans? Is Sam’s confession to Jason well-timed to try and keep him from Liz? Should she be rebounding with her hubby just as she broke off a major relationship with Patrick? Do Sam and Jason need to breathe a moment before rushing into something?

Share your thoughts in the comments section below and be sure to come back to CDL often for more “General Hospital” spoilers and news.