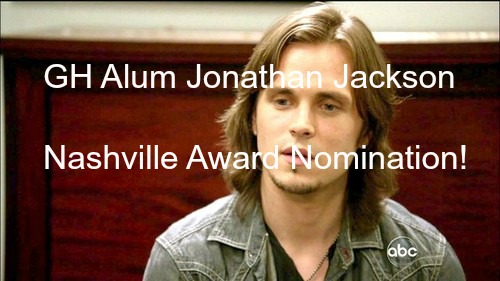 “General Hospital” (GH) spoilers tease that Lucky Spencer (Jonathan Jackson) may come back to Port Charles in the wake of Liz Webber’s (Rebecca Herbst) scandal, but now it appears he may be too busy with his work on hit ABC show Nashville to work an appearance into his schedule.

Jonathan Jackson was just nominated for a Critic’s Choice Award as Best Supporting Actor in a Drama Series. He landed the only nomination for a big-three network in that category. The other nods are for cable channels, premium cable, and even for Amazon.

It’s no surprise that Jonathan Jackson was nominated. All GH fans have known for more than a decade what an amazing talent he is. And his work on nighttime soap Nashville is equally as impressive as he stars as singer/songwriter Avery Barkley.

This year’s storyline on Nashville focused on the marriage, pregnancy, and breakup of Jackson’s character Avery and his megastar country singer wife Juliette Barnes – played by Hayden Panettiere who has a soap past as well.

Hayden Panettiere played Lizzie Spaulding on Guiding Light and Sarah Roberts on One Life to Live. Panettiere also received a Critic’s Choice nomination in the Best Supporting Actress category for her work as Juliette. If you watch Nashville, you’ll know their storyline has been poignant this year.

Juliette turned up pregnant, thought it might not be Avery’s, they broke up, reunited, she gave birth, and then went off the rails with post-partum depression. They divorced and Avery has been struggling to make ends meet as a single dad. It’s been fine work by both actors.

Their storyline is expected to continue to be central to the show as Juliette comes out of recovery and wants to reunite with their daughter Cadence. Of interest is that Panetierre herself took a break from the show because she suffered post-partum issues after the birth of her real-life daughter.

It just goes to show that some of the most incredible talent in film and TV comes from soaps – and Jonathan Jackson proves that. Let’s hope that his Nashville success won’t keep him away from Port Charles forever, though.

It seems like Liz could use a visit from ex-hubby Lucky Spencer right now in the wake of her devastating breakup with Jason Morgan (Billy Miller). Lucky could be a good sounding board since he also knew the Jason Morgan identity secret…

Congratulations to former soapers Jonathan Jackson and Hayden Panetierre on their Critic’s Choice nominations. If you want to see whether GH fan-fave Jackson wins his category, the Critic’s Choice Awards Gala airs January 17 on both the A&E and Lifetime networks.

Check back with CDL often for daily detailed “General Hospital” spoilers plus news and more!