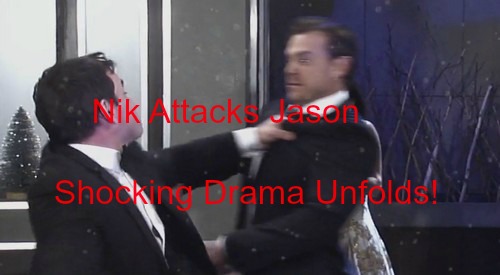 “General Hospital” (GH) spoilers for the holiday Nutcracker Gala at the MetroCourt show major Jason vs Nikolas conflict plus a proposal, baby drama, and other shocking events. Here’s a look at what we can expect once the Gala kicks into high gear.

First, it looks like Sabrina Santiago’s (Teresa Castillo) time has run out. Michael Quartermaine (Chad Duell) takes time out at the Nutcracker Gala to quiz Sabrina on facts about her pregnancy that just don’t align. Michael flat out asks if he’s the father of her child.

This is the chance for Sabrina to come clean and admit Carlos Rivera (Jeffrey Vincent Parise) is her baby daddy. Will she cop to her con? And is Carlos lurking somewhere at the Gala? He’s sticking close to keep an eye on her and may have snuck into the MetroCourt.

After talking to her daughters to get permission, Julian Jerome (William deVry) decides to put a ring on it – he’ll ask Alexis Davis (Nancy Lee Grahn) to marry him. But will Olivia Falconeri (Lisa LoCicero) complicate their happily ever after plans?

GH spoilers tease that Olivia will give Julian a special Christmas present that represents their connection as parents to Baby Leo – is the beginning of the end for Julexis if Julian gets too close to his most recent baby mama?

Also, it looks like Liz Webber (Rebecca Herbst) brings a surprising date to the gala. Is it Jason Morgan (Billy Miller) on her arm? Nah. Looks like Jason will be there as part of the Quartermaine entourage. Who’s keeping Liz company?

Is Liz a third wheel to Nikolas Cassadine (Tyler Christopher) and Hayden Barnes (Rebecca Budig)? Sam Morgan (Kelly Monaco) will be there too, but did she come with her parents or did she wrangle a date? Maybe Sam and Liz will come together… Wouldn’t that be a blast?

You can dress up Nik and Jason, but can’t take them out and expect good behavior. Earlier at The Floating Rib, Jason came after Nikolas and punched him in the face. Nikolas decides to get a little retribution and punches Jason in the face at the gala!

What caused the physical confrontation? Did Jason say something intolerable to Nikolas? Did he insult Hayden or Liz and Nik defends them physically? Or is Nikolas just tired of Jason pushing him around and decides to hit back hard?

Patrick assaults Jerry Jacks and demands to know where Robin Scorpio (Kimberly McCullough) is – looks like they got there just in time to save Robin. Speaking of perfect timing, someone walks in on Paul Hornsby (Richard Burgi) getting busy with Ava Jerome (Maura West).

Who could it be? If it’s Tracy Quartermaine (Jane Elliot), she’ll be furious because she’s falling for her ex. If it’s Morgan Corinthos (Bryan Craig) or Kiki Jerome (Hayley Erin) it will be much more complicated. Who catches them in flagrante delicto?

The Nutcracker Gala looks like it’s going to be insane drama! Scrap the Christmas shopping and tune in so you don’t miss a moment. And be sure to check back with CDL for detailed daily “General Hospital” spoilers and news.