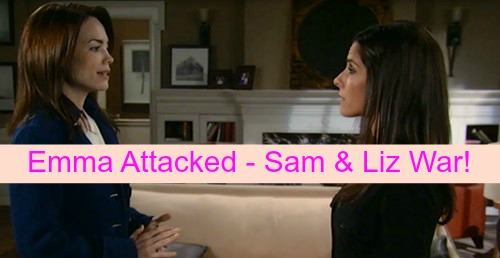 These “General Hospital” (GH) spoilers will get you ready for the November 16 show. Monday’s got big action in Port Charles. Morgan Corinthos (Bryan Craig) is going off the rails again and tells Sonny Corinthos (Maurice Benard) he wants to go after Ava Jerome (Maura West) but Sonny insists that Ava is his to destroy.

Meanwhile Ava steams things up with Paul Hornsby (Richard Burgi) who doubts her aspirations as a mobster but appreciates her sexy gratitude for the stunt he suggested that won her custody of baby Avery.

Sam Morgan (Kelly Monaco) will confess to Patrick Drake (Jason Thompson) about the smooch with her amnesiac hubby Jason Morgan (Billy Miller). Patrick is not going to like this one bit and thinks that Sam wanted much more from the encounter. It starts to get intense between Sam and Patrick but then Emma Drake (Brooklyn Rae Silzer) calls and interrupts what could have been a relationship showdown.

Patrick was distracted by Sam and ran late to get Emma who is alone at the park and then is threatened by an associate of Robin Scorpio’s (Kelly McCullough) kidnappers. This strange woman will grab Emma who will scream in terror while a horrified Robin watches all of this go down on video from the lab where she’s being held. Robin will promise to keep her mouth shut about Jason to save her daughter.

Jason is at Wyndemere and finds Liz Webber (Rebecca Herbst) and Nikolas Cassadine (Christopher Tyler) talking. He hears a mention of a lie and will start pressing Nikolas. Liz tells Jason he needs to stop pushing about Sam and his memories but Jason is agitated and won’t be deterred. Jason will threaten Nikolas and it looks like the Cassadine prince will confess – to some extent – to save Liz.

Nikolas may tell Jason he has known for a while that he was Jason but then should shelter Liz and insist she didn’t know and that Liz was there to confront him on the issue. Ultimately, Nikolas will point Jason’s rage towards Helena Cassadine (Constance Towers) and away from him and Liz. Later in the week, Jason will take off for Cassadine Island looking for the answers he needs.

It doesn’t look like Jason will tell Liz about the kiss with Sam – either because he doesn’t want to further hurt her or because he’s too keyed up over his interaction with Nikolas. Liz will head over to Sam’s place under the guise of getting her to back off and let Jason have room to work things out, but Sam calls her bluff. Sam thinks Liz there to mark her territory (and she totally is!). Will Sam blab about the kiss?

Liz accuses Sam of overstepping by showing up late at night with the convenient excise of dropping off Jason’s motorcycle. This is the first salvo in a war over Jason. Will Liz prodding Sam make her more determined to stake her claim on Jason? Yep. Liz reminds Sam that Jason is her fiancée then Sam plays the trump card and says he’s still married to her. Burn! Will Patrick tell Liz about the kiss?

Carly Corinthos (Laura Wright) talks to Lucas Jones (Ryan Carnes) and catches him up on bringing Jason to seeing Sonny and Jason recalling nothing. She asks what else she can do. Morgan is also concerned about Sonny and – despite Sonny telling him specifically to leave it alone – goes to Ava’s place and bangs on her door for a confrontation about her dirty trick at the custody hearing. Security blocks Morgan.

Is Ava even home? Could Paul be there with her getting jiggy? If Ava is alone, will she talk to Morgan? Any chance they could get in an argument that leads to something sexier? Nah. More likely is that Morgan is starting a bipolar spiral just when we thought he had stabilized. Will Ava soon have to face a combined adversarial force of Morgan and Kiki Jerome (Hayley Erin) working against her?

We also just found out that Tracy Quartermaine (Jane Elliot) is Hayden Barnes’ (Rebecca Budig) secret partner in mischief-making. It looks like Hayden is going off-script but then Tracy tells her to stick to the plan. Tracy encouraged Hayden to get the job at ELQ from Nikolas and is feeding her inside info for the Qs to get their hands back on their company. That’s a fun pairing. Can’t wait for more.

All this and more on Monday’s GH and be sure to check back with CDL this weekend for a detailed “General Hospital” spoiler for all the action next week.