General Hospital (GH) Spoilers: Sam and Liz Battle for Jason Gets Vicious – Who Will Win? 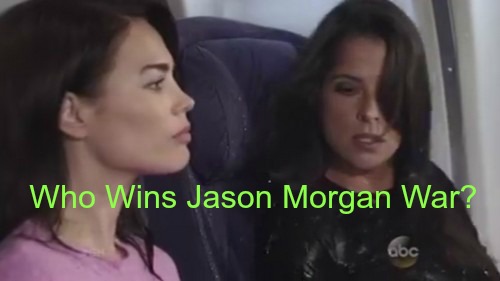 We saw on Monday that Jason is imploding from the stress of his new reality and headed out of town to find out why he’s lost years of his life. That means he needs to talk to Helena Cassadine (Constance Towers) whom Nikolas Cassadine (Tyler Christopher) said is dying.

Jason now has a stronger sense of urgency to get to Helena fast just in case Nikolas is telling the truth so he can get answers from her before it’s too late. Likely Helena is NOT in quite the crisis state that Nikolas implied, but Jason can’t take that risk.

So he’ll got to Damien Spinelli (Bradford Anderson) to get help on his quest. Interesting that Jason didn’t turn to Sam, the woman who was helping him look into his past already, and who also happens to be his wife.

And Jason also didn’t confide in Liz. He didn’t tell Sam or Liz that he was leaving, where he was going, or why. He just hopped on his bike and left with nary a backwards glance. So, of course, both Sam and Liz will assume the worst.

They may each think that he left with the other but once they both find out they’ve been left in the dust, it’s going to be a nasty footrace to get to Jason and prove that she’s the one that he should be with- and nothing will be held back.

The video clip shows the argument we saw where Liz stated she has the best claim since she’s the fiancée while Sam claims Jason is hers because she’s the wife. This left them at an impasse with neither agreeing to back off. And now that Jason is gone, all hell will break loose.

The women will hop a flight and head off to chase Jason and their catfight won’t stop even while they’re in the air. The clip also shows them throwing drinks in each other’s faces while cutting each other down.

Sam says that Liz “can’t handle Jason Morgan” but Jason is not who he once was and Liz has been handling him just fine – and Liz will surely remind her of that fact. There’s a lot at stake here. Liz has nothing to lose by chasing down Jason.

She wants him in her life to be a father to little Jake Spencer (James Nigbor) his biological son, and her other boys. Sam, however, has more at stake. Patrick Drake (Jason Thompson) will flat out tell Sam if she goes, he’s probably done with her.

So when Sam leaves Port Charles anyway, she knows this is all or nothing since Patrick won’t take her back after this stunt. That means both of the women are desperate and that means there’s no telling how far this will go.

A drink in the face may be the least of the antics these two get up to. Perhaps we’ll see them try to seduce Jason to lure him to their side, talk trash about one another, and try to derail the others efforts any way they can.

But is there a chance that all of these extreme Liz vs Sam antics could turn Jason off to both of them? He’s already confused enough and feeling pulled from all directions. What if he decides to call a break with both of them and just be a father to the children with no romantic interaction with either of them? That would shake up Port Charles – and Sam and Liz. No matter how it ends, this war of the women is must-see TV.

Check back with CDL often for more “General Hospital” spoilers and rumors on the Jason storyline and all the action in Port Charles.

Sam and Liz Fight Over JasonThe fight for Jason’s heart is on! Who are you rooting for? #GH