General Hospital (GH) Spoilers: Jason Meets Up With Spinelli – Patrick Breaks Up With Sam – Is Dante in Trouble? 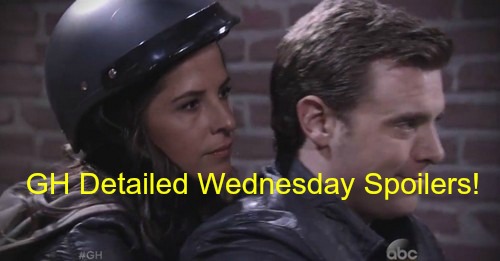 Check out these “General Hospital” spoilers for the Wednesday, November 18 show. We’ve got an arrest, breakup drama, and jealousy boiling over in Port Charles and lots of details below! First the breakups. We’ve got action on Patrick Drake (Jason Thompson) and Sam Morgan (Kelly Monaco) plus Lulu Spencer (Emme Rylan) and Dante Falconeri (Dominic Zamprogna).

Once Sam realizes that Jason Morgan (Billy Miller) left town looking for answers, she also wants to tag along for the adventure only Patrick is not having it. Patrick points out she has a fiancé and two kids counting on her, but Sam won’t be deterred. Patrick tells her if she goes, they may be done. Sam will go anyway!

Meanwhile, Lulu assumes that Dante and Valerie Spencer (Brytni Sarpi) are still intimate after she spotted them looking too close for her comfort in Dante’s cop car. Things are made worse later when Valerie sends an email to Lulu that will be a gesture misinterpreted when Lulu reads it in the context of seeing them together.

Lulu rants to Maxie Jones (Kirsten Storms) that she saw Valerie and Dante together. Will Maxie then quiz Nathan West (Ryan Paevey) about this “ongoing” affair?

Also, will Lulu call up Alexis Davis (Nancy Lee Grahn) and tell her she wants those separation papers after all? And is there any chance Lulu will also change her mind about giving Dillon Quartermaine (Robert Palmer Watkins) a revenge tumble?

At work, it looks like Valerie may be on the verge of getting Dante into big trouble. What did she do? Was it sleeping on the stakeout? The affair? And, as an aside, did Paul Hornsby (Richard Burgi) assign Val to Dante to mess with a Corinthos kid for sport?

Later, Liz Webber (Rebecca Herbst) goes to the Quartermaine mansion in a panic and tells Michael Quartermaine (Chad Duell) that she can’t find Jason and he didn’t come home last night. Sabrina Santiago (Teresa Castillo) and Michael may have an awkward marriage conversation that she interrupts.

Bottom line, Jason is not there and Liz will soon realize he left town looking for answers. Looks like Jason is in Portland with Damien Spinelli (Bradford Anderson).

Even though Jason doesn’t remember their friendship, he knows how helpful Damien was finding answers for “Jake” and asks The Jackal for help again. Damien says yes and the adventure begins. Then Sam and Liz will follow Jason out of town cat fighting the whole way. This is not-to-miss drama with all five of these characters looking for answers (or in Liz’s case, trying to block Jason from getting the answers he wants).

Now to the arrest! Nathan cuffed Franco (Roger Howarth) right in front of Carly Corinthos (Laura Wright) and Morgan Corinthos (Bryan Craig). Morgan will likely fight off his mom’s insistence that he go see the shrink so he can run warn Kiki Jerome (Hayley Erin) about this troubling development.

Also does Carly really think Franco would intentionally run her off the road? Morgan may remind Carly how much Franco hates her so she buys this story and doesn’t think it might be someone else.

If word spreads that Franco went nuts and ran Carly off the road, he could lose his reinstated position at GH as an art therapist. That would suck but it would free him up to work at Crimson with Nina Clay (Michelle Stafford) and wouldn’t that be fun?

Franco will tell what he thinks is the truth – that his car was sideswiped in the garage, but then he’ll realize it was Kiki and what then? Speaking of crazy, Anna Devane (Finola Hughes) drops her psychiatric meds right at the feet of DA Paul so that’s not good.

How will Paul use this new information to taunt and manipulate Anna? And did he and Ava Jerome (Maura West) do the naughty deed on her sofa? Fingers crossed that they did. Gotta love those two together.

Anna may still be working on the Sonny Corinthos (Maurice Benard) shooting and Paul won’t like this. Also, any chance Paul might do something dastardly like swap Anna’s meds with some Rohypnol and take her to bed while she’s loopy (or something even worse)?

Don’t miss a moment of the action and check back with CDL after the show for more detailed “General Hospital” spoilers, gossip, casting news and more!