General Hospital (GH) Spoilers: Surprise Guest Ruins Jake and Liz Wedding – Who Will it Be? 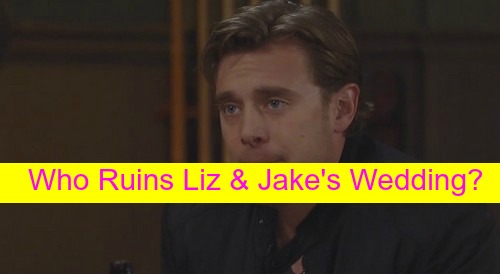 The “General Hospital” (GH) spoilers considers the surprise guest rumored to be at Liz and Jake’s wedding and what it could mean. The LiaSon wedding is coming up fast on November 6 – Read our candidates for the mystery wedding appearance and then share your comments.

Jake Doe (Billy Miller) and Liz Webber (Rebecca Herbst) are preparing for their big day that’s just a couple of weeks away, but obstacles still plague their union. Jake is on the hunt for his identity and Liz wants him to stop the search.

He won’t and it may be Damien Spinelli (Bradford Anderson) that clues Jake in on who he is, but persistent “General Hospital” rumors indicate that Jake won’t reveal to anyone else that he knows his identity because his memories are still lost in his cranium.

The mystery guest at the wedding will very likely have something to do with the ‘Jake as Jason’ reveal. What we do know is that Jake and Liz should not make it to the ‘man and wife’ proclamation. Whether that’s because Jake dumps Liz at the altar or someone screams ‘I object’ is yet to be determined. Below we share some suggestions on the identity of the unknown wedding guest and what they do when they show up to the nuptials…

#1 Robin Scorpio (Kimberly McCullough)
We know that Robin is coming back to Port Charles to wrap up her storyline since it’s been pretty open ended. Robin also knows Jake is Jason thanks to her reviving him from the “dead.” If Robin got wind of the wedding, she may show up in Port Charles to stop Jason from saying ‘I do’ with Liz when he’s already married to Sam. Plus Robin seems to have a knack for ruining Port Charles weddings.

#2 Helena Cassadine (Constance Towers)
There have been rumors of a Helena return swirling for months. Helena had a distinct hand in the situation Jake is now in since her mind control brain implant may have fried his brain and lost all his memories. While Helena isn’t likely to be sympathetic to Jake’s situation, she wouldn’t miss a chance to wreck a Spencer-adjacent event. Helena would be a perfectly monstrous mystery guest.

#3 Ric Lansing (Rick Hearst)
The last thing Ric wants is for Liz to tie the knot with Jake. Ric is horribly jealous of Jake already, without even knowing that he’s Jason Morgan. Ric would doubly hate him if he found out that he’s Jason – the guy who he feels has usurped his position as the true brother of Sonny Corinthos (Maurice Benard). If Ric discovers that Jake is Jason, he would love to show up uninvited and ruin the big day.

#4 Hayden Barnes (Rebecca Budig)
Obviously, Nikolas Cassadine (Tyler Christopher) will be invited since he’s a close friend to Liz – even though Jake does not like him. But would Liz agree for Nikolas to bring Hayden as his plus one? Nikolas may try to leave Hayden at home so she and Liz don’t get into a wedding day catfight, but would that keep Hayden away? She could show up and blow up the event with the Jake news anyway.

#5 Audrey Hardy (Rachel Ames)
This is likely NOT the big ‘surprise’ guest since it was recently announced that Audrey would be at her granddaughter Liz’s wedding. Plus, we cannot think for a moment that whoever this unexpected gust is that it will be a positive thing. That’s not how surprises at weddings in Port Charles work. But what this does mean is that Audrey will be there to find out all about the horrible lies that Liz has been telling!

So who do you think the surprise guest will be at Sam and Jake’s wedding? Share your comments below. And be sure to check back with CDL for more “General Hospital” spoilers every day.