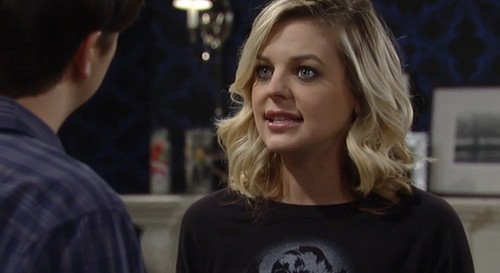 Here are some hot “General Hospital” spoilers to get you ready for today’s show – the Wednesday, August 26 GH episode. First, Alexis Davis (Nancy Lee Grahn) heard on the news about Ava Jerome (Maura West) being alive and confronts Julian Jerome (William deVry) about keeping secrets from her. This makes Alexis more suspicious that Julian is up to no good. Julian lays it all out for Alexis including the fact that he only just found out about Ava being alive, but does say that he needs to help his sister.

Nathan West (Ryan Paevey) tells Dante Falconeri (Dominic Zamprogna) that he thinks his sister Nina Clay (Michelle Stafford) is innocent of murder charges in the Silas Clay (Michael Easton) case. Nathan wants Dante to help him look for another culprit so he can get his sister off the hook. Dante agrees to help and they brainstorm possible other suspects then make a major discovery.

Madeline Reeves (Donna Mills) is furious that Nina is in jail for a murder charge. She blasts Ric Lansing (Rick Hearst) for letting this happen to her daughter. Rat fink Ric will try and convince Maddy it’s the best thing since Nina isn’t competent to stand trial and he insists he can get her remanded to Shadybrook for the long run so they can have her millions.

Nina isn’t too upset to be in jail because her next door cell neighbor is Franco (Roger Howarth). Those crazy kids act like they’re on their first date at the PCPD lock up. They have juice boxes and romance and each other – that’s all they need. Franco reassures Nina that she’s fine and pulls her back from the deep end and closer to sanity by his love for her. Aww…

Kiki Jerome (Hayley Erin) comes to see Morgan Corinthos (Bryan Craig) to demand answers. Kiki wants to know why Morgan is playing so hurt that Ava is alive. Can Morgan convince her it’s just the shock of the situation or will Kiki begin to question that there might be more going on there? Kiki may need to visit Franco to talk this through.

This Ava thing has Morgan’s composure slipping fast and Sonny Corinthos (Maurice Benard) and Carly Corinthos (Laura Wright) are increasingly concerned. They don’t want Morgan to keep on spiraling, but what can they do? Morgan is agitated and doesn’t want parental advice even though his parents are the only ones who know the whole story and can help him.

Sonny comes to threaten Ava in jail – again – haven’t we seen that scene a year ago? Remember when she was in lock up before she went to Pentonville? This is that scene 2.0! Sonny rails at Ava over his daughter being kidnapped for her bone marrow. Then Sonny rails at her about shagging Morgan again. Ava is on Sonny’s crap list for hurting his kids – now he wants to hurt her.

Don’t miss a moment of Wednesday’s episode then come back to CDL for more “General Hospital” spoilers, gossip and news.