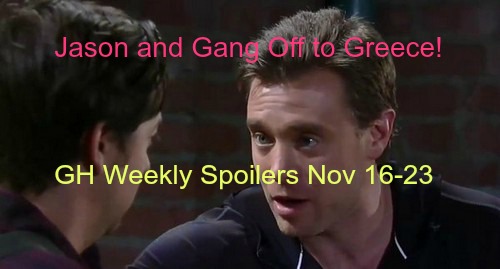 Check out these “General Hospital” (GH) weekly spoilers for the episodes from November 16 through November 20. Things will happen fast this week in Port Charles now that Jason, Hayden and Nathan need answers to burning questions.

Karma coming for the Cassadines
It’s about time someone made those cruel Cassadines pay and karma will come soon. A livid Jason Morgan (Billy Miller) tells Nikolas Cassadine (Tyler Christopher) to fess up or get beat up and Nikolas will throw his grandma Helena Cassadine (Constance Towers) out as the real mastermind behind all of Jason’s trouble.

Also asking questions is Hayden Barnes (Rebecca Budig) who wants to know who shot her and if it was really a bullet meant for Jason. This all points back to Nikolas as the culprit which will intensify Hayden’s plans to work with secret partner Tracy Quartermaine (Jane Elliot) to take back ELQ for the Quartermaines and make a fast stack of cash in the process.

The Jackal and Stone Cold ride again!
After Jason hears from Nikolas that answers await on Cassadine Island, the amnesiac is ready to pack his bags and go towards Greece but first will reach out to pal Damien Spinelli (Bradford Anderson) and request backup on his quest.

Spinelli will be thrilled to hang with former (and new) bestie Jason as he searches for the truth. Is Ellie Trout’s (Emily Wilson) foot well enough for Spinelli to exit stage left? Also, who will they find on Cassadine Island and will The Jackal and Stone Cold end up with more questions than answers while looking for Helena?

Liz vs Sam in battle for Jason’s heart
This week sees the relaunch of hostilities in the vicious battle between Liz Webber (Rebecca Herbst) and Sam Morgan (Kelly Monaco) over Jason. Liz wants Sam to go away and let her keep Jason – yeah, right – but that’s not going to happen. Liz says she’s the fiancée and Sam says wife trumps fiancée and it’s off and running.

When Jason leaves town to go searching for answers in Greece – both will follow but for diametrically opposite purposes. Sam desperately wants Jason to regain his memories and Liz wants that door to remain firmly closed. Will Sam and Liz play nice only when Jason is watching them?

Morgan will not listen (no surprise there). Carly Corinthos (Laura Wright) feels like Sonny is not following doctor’s orders by leaving the hospital and they argue about their issues. But then Sonny has to face off with the one person in Port Charles not scared of him – Epiphany Johnson (Sonya Eddy) – who takes over his rehab program and kicks his butt into shape.

Morgan and Kiki in codependent spiral?
They say misery loves company and both Kiki Jerome (Hayley Erin) and Morgan are miserable and out of control. Morgan tries to support Kiki and encourages her to get a job but then comes up with a more outrageous plan.

Morgan wants Kiki to run away with him. Since they are both furious at Ava and feel she’s undeserving of Avery since she’s an uber-bad mom, will they plan to run away from Port Charles after snatching baby Avery? Carly thinks Morgan is off the rails as he overreacts to things psychotically. Looks like it’s time to get Morgan an appointment with Dr Andre Maddox (Anthony Montgomery) to get checked out for bipolar disorder.

Crazy at Crimson and PDA at the PCPD
Nina Clay (Michelle Stafford) freaks out that she’s in over her head at Crimson and turns to her newly minted assistant Maxie Jones (Kirsten Storms) who gives her a Working Girl style makeover and reassures her that she can do this. Nina will be grateful to Maxie and this looks like the start of a beautiful work friendship.

Nathan West (Ryan Paevey) will dig his sister and GF working together. Over at the PCPD, Lulu Spencer (Emme Rylan) suspects PDA between her hubby Dante Falconeri (Dominic Zamprogna) and Valerie Spencer (Brytni Sarpi) when she sees a work-related email that she misinterprets as personal.

Will Lulu turn back to Dillon Quartermaine (Robert Palmer Watkins)? Speaking of PCPD PDA, sneaky DA Paul Hornsby (Richard Burgi) gets a steamy “thank you” smooch from Ava in gratitude for his suggestion to set Sonny up for a rage tantrum at the custody hearing.

Five-0 Questions Franco
Nathan looks into Carly’s car crash and will find out that the car was Franco’s (Roger Howarth) and he suspects Franco of an intentional hit and run since the former madman was pushing the repair shop to get it fixed ASAP.

Of course it was Kiki that did the deed, but only she and Morgan know that. What Nathan knows for sure is that Franco hates Carly for cheating on him with Sonny – and Franco is a known killer. Will he arrest his sister’s BF? And will Kiki let it happen or tell the truth? Morgan also hates Franco and will encourage Kiki to let him go down for her crime while they skip town.

All this and more on an action-packed week in Port Charles. Be sure to check back with CDL for detailed daily “General Hospital” spoilers plus casting news and more.